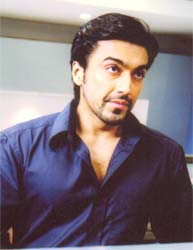 Look who's sporting a moustache these days! It's the suave Aashish Chowdhry who was last seen as a cute Gujju Parsi in the runaway comedy Dhamaal.


In his forthcoming modern day satirical movie 'EMI', Aashish plays a contemporary, hard working & ambitious executive. Apparently, the Director of EMI wanted Aashish to grow a moustache and a beard to make his character look more convincing as this was the first time the actor was playing a simple middle class executive.


However, Aashish was completely against the idea since he felt that it wouldn't suit his image. But on persistence by the Director, he gave a few shots with the proposed look and on seeing the rushes; Aashish realized that it indeed went very well with his character in the film.


We hope that the audience too loves your de-glam avatar & that your performance is also equally appreciated!