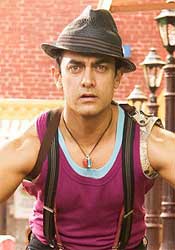 Featured Video
'Ghajini' is a simple and straightforward revenge story, but Aamir Khan's bravura performance makes it an extraordinary watch. The film brings back the popular theme of the '80s and early '90s - revenge, romance, action and thrill with a nice touch of humour.

Just like Christopher Nolan's 'Memento', the past and present are juxtaposed neatly in 'Ghajini' that has great action scenes excellently choreographed. Director A.R. Murugadoss maintains the thrill till the end.


After playing a sensitive teacher in 'Taare Zameen Par', Aamir goes for a role reversal in 'Ghajini' and impresses as an amnesiac killer. His agility and ruthlessness in the action scenes make it a compelling watch.


In terms of script, the film has nothing new to offer. What actually plays spoilsport in the film is the romance sequence. Although love forms the basis of the revenge that the protagonist seeks, the romantic scenes are neither written properly nor executed convincingly.


Also, Asin's character is not etched out properly and her acting skills are not impressive either. She looks good in a few scenes, especially in song sequences.


Comparatively Jiah Khan, who has a sizeable role, does a better job as a medical student. She looks quite hot in the 'Lattoo' song.


Sanjay Singhania (Aamir), a businessman tycoon who owns a cellular phone company named Air Voice, falls in love with Kalpana (Asin), a struggling model who fabricates a story that she is dating Sanjay in order to get big offers though she has never met him. She goes to the extent of giving an interview about her relationship with Sanjay to a magazine. 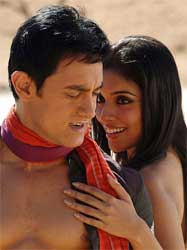 Irritated by Kalpana's lies, Sanjay decides to confront her. On his way to meeting her, he sees a young girl (who happens to be Kalpana) helping handicapped children. At the studio he is pleasantly surprised to realise that Kalpana is the same helpful girl he had seen. He chooses to hide his identity.


Thereafter Sanjay keeps meeting Kalpana and their romance blossoms. He never reveals his true identity. The two decide to get married.


Meanwhile, Sanjay has to go to London on some business deal. While he is abroad, Kalpana saves a group of young girls from flesh traders led by the don, Ghajini (Pradeep Rawat). When Ghajini comes to Kalpana's house to avenge the loss and embarassment, incidentally, Sanjay too arrives.


Ghajini kills Kalpana and injures Sanjay with a heavy iron rod that causes him to lose his memory.

Apart from Aamir's admirable performance, the film's editing and music are excellent.


The film is good in bits and pieces. There are several loopholes in the film and scenes that leave many questions unanswered. The director takes an easy way out by not detailing the scenes.


Undoubtedly, Aamir is the highlight of 'Ghajini', and it is worth a watch for his sake.