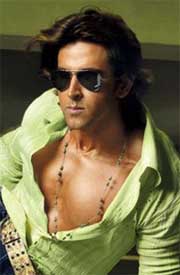 After the grand success of Ghajini at box office, Bollywood should ready itself to witness another raise in the bar of action-drama genre. The producers of this former Telgu remake have decided to gamble one more time, with yet another remake of a Telgu superhit, Maghadeera, released earlier this summer.


The movie, in its original, is a travel-in-time theme between the past and present, wherein the lead actor who is a current age professional adventurist is in fact a reborn version of old warrior from the 1600's. His older life and its memories are evoked when he encounters his then unfulfilled love with the lady protagonist of the movie, who accordingly portrays a character in the past, reborn in the same time as him.


News has it that the producers, in their proposal of a remake have wished to cast Aamir Khan again, along with Hrithik Roshan this time. Instead of the rebirth philosophy however, these two will essay roles as split personalities in the remake; where Hrithik will play a role parallel to the ancient warrior, and Aamir will essay him who was intended to be the modern day hero.


Together this duo of producers reveal their dream to revive the grandeur of real time action in Bollywood drama to another level after Ghajini. The viewers meanwhile, with the first time coming together of the two big Bollywood heroes can only wait and watch for the progress of this project which as of now is expected to be budgeted at 70 crores.
Featured Video