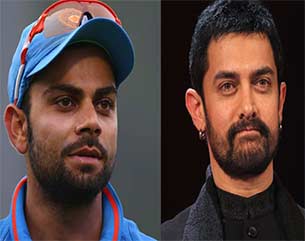 The Election Commission is likely to appoint Bollywood actor Aamir Khan and cricketer Virat Kohli as "national icons" who would encourage more and more people to vote in the general elections.

They said the poll panel has approached Aamir and Kohli and is likely to make an announcement about their inclusion as national icons in the coming days.

Officials said there are several state-level icons, also referred to as brand ambassadors.

"It is for the first time that there would be six national icons to boost voter participation," an official, who did not wish to be identified, told IANS.

He said the national icons were not only well-known people but had an appeal cutting across age groups.

"Over two crore (20 million) first-time voters will be eligible to exercise their right to franchise in this election. The number of young voters will also be large. The national icons have a special appeal among the youth," the official said.

Aamir, who has been pitching for better voter participation in his individual capacity, is now expected to do so on behalf of the poll panel.

During the launch of a TV show last month, Aamir said he has been approached by the poll panel to spread the message about the significance of voting.

Kohli was part of an awareness campaign for the Delhi assembly elections last year.

The sources said the national icons would also feature in print and electronic advertisements released by the Election Commission.

Over 814 million people will be eligible to vote in the 2014 elections, making it the biggest Lok Sabha polls -- and the biggest democratic parliamentary elections anywhere in the world.

(Alok Singh can be contacted at alok.s@ians.in)

Neil Bhatt talks about prepping up for Ghum Hai Kisikey ...
0 seconds ago

Pooja Bhatt: "Alcohol was my drug of choice", Opens Up about ...
36 minutes ago