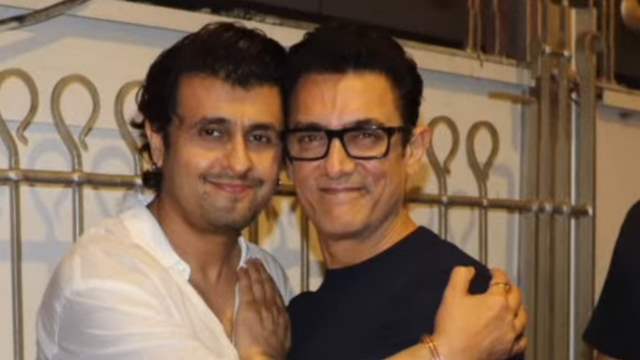 Sonu Nigam has every cause to be delighted these days. After all, the acclaimed Bollywood playback singer was just awarded the prestigious Padma Shri Award, the country's fourth highest civilian honour.

President Ram Nath Kovind presented Sonu with the medal during a ceremony at the Rashtrapati Bhawan earlier this week. Sonu was ecstatic, and he threw a big party to commemorate the occasion, which was attended by a slew of industry stars.

In the midst of all of this, Bollywood's Mr. Perfectionist Aamir Khan was spotted at Sonu Nigam's gala. He was dressed in a black t-shirt and denim, with spectacles and brown shoes to complete his ensemble.

The Raha Hindustani star congratulated Sonu Nigam on his victory and hugged him. Anil Kapoor, Shaan, Rohit Roy, Neha Bhasin, and others were among the celebrities that attended the celebration.

Take a look at Aamir Khan's video of him hugging Sonu Nigam after he received the Padma Shri award.

The Bollywood actor has an amazing line up of films ahead. Aamir Khan is anticipating the release of his much-anticipated film Laal Singh Chaddha.

The film, directed by Advait Chandan, is the official Bollywood version of the Hollywood classic Forrest Gump, and will star Kareena Kapoor Khan (Jab We Met) and Naga Chaitanya.

+ 7
2 months ago beautiful voice, ive seen him live twice and he sounds exactly the same in real life. surreal.