View Profile
The Queen of ‘Item numbers’, Rakhi Sawant, happened to conquer the heart of ‘The Perfectionist’, Aamir Khan. She 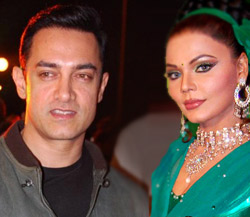 Featured Video
recently has sent a hand-written invitation to Aamir, wanting him to be her first guest in her show. Much to everyone’s surprise, Aamir, who generally doesn’t like socializing and attending shows, has accepted to be on the show.

When Aamir entered, the first thing Rakhi said (obviously in Hindi as her English would have made Aamir think twice); that she idolizes him. According to her, anything that he does becomes news, and in any movie he acts becomes a super hit. She said that she wanted her show to be a hit and that’s why she wanted Aamir to be her first guest.

Now is this a publicity stunt from Aamir for his nephew Imraan whose debut movie is due this Friday or was Aamir really touched by Rakhi’s gracefulness?

Well, we don’t know much about what happened parde ke peeche but certainly anything and everything is possible in Bollywood. And about Rakhi, she has got another chance to pose for media cameras, hopefully not for any controversial thing this time around!