View Profile
Chhote Nawab of Lucknow -Tanmay Chaturvedi and Surma Bhopali -Amir Hafiz from Bhopal- the two contestants of Zee SaReGaMaPa L'il Champs have enough reasons to smile away. They have got a break to playback for Ravi Chopras upcoming film Bhoothnath - an opportunity which the aspiring singers can mostly dream about. 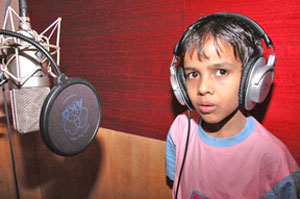 Featured Video
After hearing the two Li'l Champs, Tanmay & Aamir, on Zee TV Sa Re Ga Ma Pa Stage Vishal & Shekhar (V & S) were very impressed with their singing and they wanted these two to sing for their forthcoming film, Bhootnath – A Ravi Chopra film starring megastars such as Amitabh Bachchan and Shah Rukh Khan. When (V & S) approached Big B & Ravi Chopra with a proposal to make these two to do the playback singing, they welcomed & appreciated the idea.


Aamir and Tanmay were called a couple of days back to audition and to their utter surprise, they got selected. On asking Vishal of the Vishal-Shekhar duo he confirmed the news and said, “We have used many kids voice in the film. But we needed two very strong voices for these particular tracks. And you know now SaReGaMaPa is our home ground. After listening to them on the sets and also on youtube we selected Tanmay and Amir and recomended them.” The film incidentally also has a song sung by Musarrat another past contestant from SaReGaMaPa. 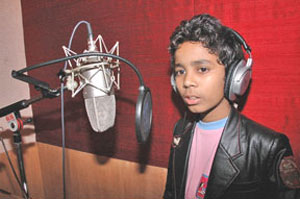 Aamir has already recorded the song titled 'Mere buddy suno zara' with none other than Bachchan Saab himself while Tanmay sang a group song titled 'Hum toh hain aandhi.’ Ravi Chopra as well as the composer duo was very impressed with the good work done by both Amir and Tanmay. Infact Amitji is so impressed with these little masters that he offered an exclusive screening of Bhootnath to be organized for the little kids on January 30th, 2008. Tanmay and Amir are both on cloud nine after hearing the feedback from the Bhootnath team and also about Amitji‘s special gesture.


The possibility of seeing Mr.Big B gracing the L’il Champs set seems like a big possibility too.
Our heartiest congratulations to both Tanmay and Amir for their first breakthrough in Bollywood Music Industry. They and their talents have been noticed and they can only go further ahead. We wish them both the very best.

13 years ago omg can't wait to hear all three of them singing (TANMAY, AMIR AND MUSARRAT)
anyone who places those songs on youtube??? (A)

13 years ago how sweet?! Tanmay is so cute and a great singer and Amir is a really gud singer too!! keep it up boys!!

+ 3
14 years ago congratsss to tanmany and amair, my fav lil guys including rohan preet love you three :)

14 years ago Congratz Tanmay and Aamir!!! Two from my top three favorites!!! Congratz to Mussarat also!!!