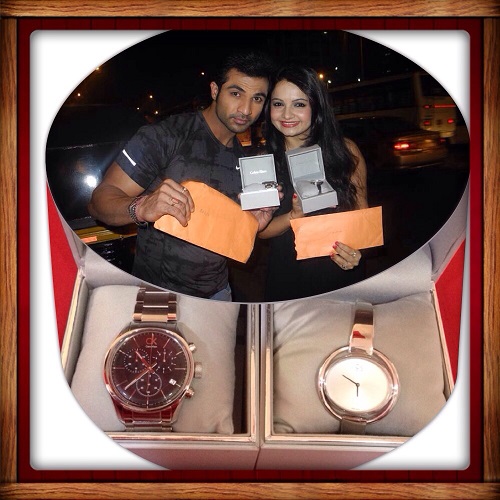 Fans have given unconditional love to Ahem and Gopi of Rashmi Sharma Telefilms' popular show Saath Nibhana Saathiya. Ex Gopi Giaa Manek who made a sudden exit from the show, broke hearts of many fans who loved the magical Jodi of Giaa Manek and Mohammad Nazim.

Though good friends Giaa and Nazim keep meeting at events but this time they casually met other than events just because of their fans. TellyBuzz spoke to Giaa to know more about how fans become a reason of her meeting with Nazim.

Giaa told us, "My fans had sent a letter and a gift for me and Nazim to a known news channel. They later received a receipt of the delivery sent to the news channel after which they kept chasing the channel to deliver it to me and Nazim but all went in vain. They were shattered because they had saved their pocket money to buy these gifts for their favorite actors.

After a lot of efforts they found out my address and sent me a letter informing me about this unfortunate incident and in no time, they again spent their pocket money in buying and sending us the same gift which they had sent earlier requesting me to keep mine and deliver Nazim's gift to him. I was heartbroken to know what they all had to face and decided to do the needful. I got in touch with Nazim, met him and clicked pictures with him along with the gifts, read their letters together and decided to upload a picture to appreciate what they did for us."

When asked Giaa about her experience of meeting Nazim after a long time, she said, "Nazim and I keep meeting at events and award functions but not other than these. So, it was great to meet 'Ahemji' other than meeting him in the events and all thanks goes to the fans. I am extremely thankful to our fans who gave and continue to give unconditional love to their Gopi and Ahem."

Though Giaa appreciated the love of fans but at the same time, she also felt bad with the incident which happened. Giving a message to her fans, Giaa told, "I love you all as much as you all do! Henceforth please save your pocket money to buy something for yourself. I feel happy and blessed as long as I continue getting your unconditional love and support."

6 years ago Love u giaa and giaa maanek..,love u both...come back soon

6 years ago Loved their on screen chemistry. Still missing them alot.

6 years ago Love their chemistry. Hope we get to see them together on TV. Doubtful, but would be great to see their magic on screen

+ 2
6 years ago giaa manek ws best for ds shw...I really miss her, plz come back soon giaa, thank u so much for ds article

santosfanofgiaa 6 years ago It's a very beautiful article... Many many thanks to India forums... Wonderful gift to Giaa n Nazim... Your Jodi was awesome in the serial... Always gave pleasure to us :-)

+ 4
6 years ago aww adorable after long time they look great...

6 years ago wow great article. One of the best jodi of tellywood. GiNa rocks.
Love them alot.