Television Awards these days are getting bigger & better..on par with any film awards! Glitz, glamour, stars..it has it all! The 7th Annual ITA Awards held on Friday, 16th of November was truly a memorable night for everyone associated with the Television fraternity, especially those stars who won accolades and awards for their hard work through the year. The Telly Buzz team spoke with few of the winners.. 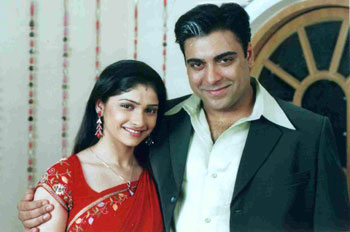 Featured Video
It was truly an exciting evening for the pretty & immensely talented Prachi Desai, who won the Best Actress award in the Popular category for her portrayal of Bani Walia in Kasamh Se. “I am thrilled and happier because I won the Best Debut Award here last year, and now I have gone a step ahead and won the Best Actress Award!”, says a jubilant Prachi.

Not to be left behind, her on-screen husband Ram Kapoor aka Jai Walia, who won the Best Actor Award in the Popular category for Kasamh Se said, "I am very happy to receive this award, and am glad that all my hard work paid off." Being a seasoned campigner in winning awards, Ram quickly said, "Every award that I get has given me a nice feeling." "No, I really was not expecting it. I cannot explain how amazed I was when my name was announced. I am so happy!", chirps Prachi in her cute little voice, after she got the Best Actress Award for the first time.

Ram Kapoor had a gala time at the ITA this year as an anchor. "Anchoring was a very nice but different experience altogether, where I got a chance to be myself", says the actor who successfully got into the groove of an anchor at the Awards Nite.

Heartiest Congratulations to Prachi & Ram. At Telly Buzz, we wish them All the very Best! Hope to see them entertain their viewers for a long long time to come, and also win many more awards in the future!

NO OFFENSE TO THEIR FANS ! IM NOT MAKING FUN OF YOUR FAVORITES BUT STILL I DONT BELIEVE THEY THE MOST POPULAR....

BUT OFCOURSE........AS MANY PPL SAID........FLATTER EKTA......AFTER ALL SHE RULES THE AWARD FUNCTIONS AND PROBABLY EVEN SPONSERS A COUPLE OF THEM WITHOUT ANYONE KNOWING........SO HOW CAN RAJEEV AND SMRITI POSSIBLY WIN...!

+ 2
14 years ago Congratulations to both Ram and Prachi!!! I'm really happy for them!

14 years ago congrats n did they aired the show already or what? send the link to my account plzzzzzz