Here's another Big B playing Gabbar in yet another "Sholay". Only this one is in Bhojpuri, with the regional cinema's Big B Ravi Kissen playing the bad man in the Ekta Kapoor production. Indirectly taking a dig at "Ram Gopal Varma Ki Aag", which has so far faced brickbats from film critics, Ravi has been spotted raving about the Bhopuri "Sholay" at just about every event. 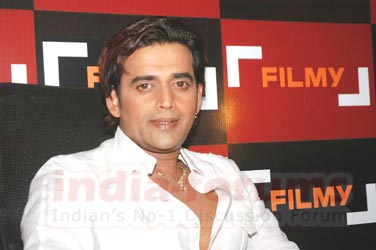 Featured Video
At a recent movie promotion event, he said: "We are making a "Sholay" which will be an extension of the original one with the same action. We are not modernizing our movie and this "Sholay" will not put anyone in shame. The Gabbar is also as dangerous as the original one. I am sure the movie will have the same charm as G.P. Sippyji's version."

Many veteran actors like Mithun Chakraborty and Nana Patekar were earlier considered for the role of Gabbar in the Bhojpuri "Sholay". But finally it was Ravi who bagged the assignment. "The Bhopuri audience is very excited and eager to watch me as Gabbar. So are my friends," Ravi said.

The actor is planning to produce a remake of critically acclaimed "Paar", and play the role that Nasserudin Shah had essayed in the film. But even while playing such a realistic role, could Ravi ignore his female fans? To keep them happy, Ravi will appear bare chested in the film. The rest all will be the same --- rearing pigs and rolling in the mud et al. In the bid to impress his fans, hope Ravi remembers that the character is meant to be deglamourised and poverty-stricken.