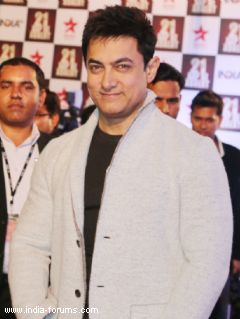 Aamir Khan says a project starring Bollywood's three Khans - Shah Rukh, Salman and himself, would be exciting and that he would be happy to do it.

The trio recently appeared together on the same stage.

Asked about any plans to work with Salman and Shah Rukh in one film, Aamir said: "I really think a film with three of us would be exciting...and if ever a script, which appeals to three of us, comes up, I am sure we would be happy to do it."

Aamir, who is currently busy promoting his much awaited film "PK", says he has neither signed any new films nor is he going to do his TV show "Satyameva Jayate" next year.

"I'm not doing 'Satayamev Jayate' next year, and currently, I am not doing any films. I am currently reading scripts and deciding on what to do next. When I find a good script and which excites me, I will sign it.

"Right now I don't have any films and since 'Satyamev Jayate' just completed a series, we feel we need a break after five years of research just for emotional reasons and to heal. We would come back, but we don't know when. But next year you won't see a release from me," he added.