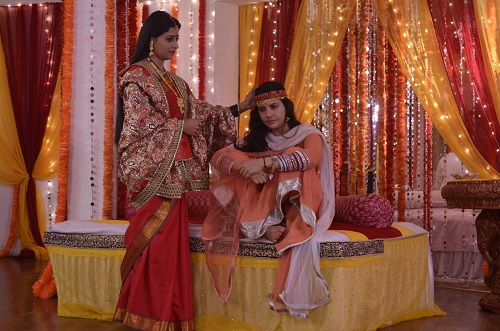 As the story of Rajan Shahi's newly launched show Itti Si Khushi is moving forward, interesting twist and turns are all set to enthrall viewers in its upcoming episodes.

The flavor of Navratri festival will be witnessed by the viewers in tomorrow's episode where a big Jagrata sequence will be held in the presence of some special guests. We heard that famous singer Mika Singh and the very famous and renowned Jagrata singer Lakhbeer Singh Lakha will grace the Jagrata sequence of the show with their magical voice. Actress Reena Kapoor who essays the character of Bhavna in Zee TV's Aur Pyaar Ho Gaya, too has been roped in to play a very important cameo for that particular episode. It going to be a one and a half hour special episode.

We spoke to the producer Rajan Shahi about this special episode. He told us, "Its going to be an entertaining episode full of interesting twist and turns in which Neha (Smriti Kalra) will come across a first conflict in the show. To make the sequence more interesting, special performances have been portrayed by popular singer Mika and the very famous Jagrata singer Lakhbeer Singh Lakha. Mika will also be having a nice interaction with Neha. The cameo part of Reena Kapoor will add a very different touch to the sequence and new dimensions will be added to the show from tomorrow's episode onward."

6 years ago Love you Smriti Kalra. best actress of TV.

+ 4
6 years ago Reena Kapoor
u r one of the best actress of tellywood
love u always
cant wait 2 see u in special episode...

+ 3
6 years ago His show is damn interesting
Smriti rocks as Neha!

6 years ago Waiting to see the twist in the story.Smiriti kalra is very good as Neha.

6 years ago Looking forward to the twist! Smriti Kalra is doing amazing in itti si khushi! Keep it up :)

+ 4
6 years ago reena kapoor you are a beauty

the more i love u the less it is.. keep rocking.. rani of hearts