On the eve of Kya Dill Mein Hai’s launch, Ekta Kapoor is super excited about the star cast of the show, rather than anything else. We talk to the leading lady of Balaji - Ekta Kapoor her self, about her take on the show and the star cast. 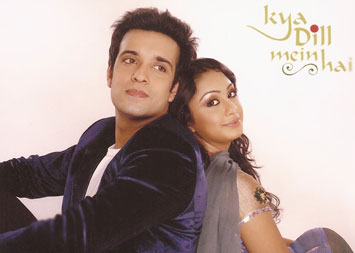 Featured Video
“A cook doesn’t know how the dish comes out until its completely done. Even a good cook, won't know exactly how the dish has been; the same way, we have done this show - Kya Dill Mein Hai, keeping in in mind perfection, and trying to take it above all standards, but we too don’t know how it will turn out to be. It is for the audience to decide. Kya Dill Mein Hai, is a love story, with loads of drama”, quips Ekta.


Ekta looked over enthusiastic, when it came to the star cast of the show. “Abigail is a complete sweet heart, she was chosen instantly. She has a certain rawness, which I wanted to show in the character. The character - Kakoon is an eighteen year old girl, while Abigail is 15, but her innocence and rawness is what we looked for, in Kakoon, says Ekta.

"As for Aamir Ali, we have been wanting to work with each other post Kahaani, and when this show came across, we decided to go for it, as the timing was perfect. I am so glad that he’s back, and I hope he wins Nach Baliye", says Ekta. Talking about Anita's role in the serial, Ekta quips, "Anita is just doing a cameo with us, which is for hardly 3-4 episodes. I could have taken Anita as Kakoon, but then Anita is not 18, and this story is about ‘pehla pehla pyaar’. But I am glad that she is at least a part of the serial.”

Signing off, Ekta states, “This is a show that is guaranteed to take you on a high voltage drama roller coaster ride, with a love story and added features. I used to love Des Mein Nikla Hogaa Chaand, I even spoke to Arunaji, about the way she managed to glue the audience to a show that had only a love story to it. I remember the very words of Arunaji to me then, that the love story is just a thread, and the added action and drama are the beads to complete and glorify the show, and this is exactly what I have managed to do here", exclaims Ekta. "Watch Kya Dill Mein Hai, the first three episodes are certainly going to make you fall in love all over again, and the 360 degree turn that happens post the 3rd episode, is sure to take you down a roller coaster ride...”, adds Ekta.

Get ready for a hour of action packed drama with Kya Dill Mein Hai, starting the 1st of December only on 9X....

+ 4
14 years ago Poor amir!!Well being a student of psychology, i think Tahir might not be aware of his ailmeant and if they have a certificate from the hospital saying he is mentally ill indeed,then his stement cant be taken into consideration!!

14 years ago gr8 show.... looking 4ward to all the bengali traditions. saw it last in KZK..

+ 4
14 years ago all serials look good in starting lets seen what happens later!

14 years ago Sigh how much i wished it was sanjeeda with amir,
i love their pair

+ 4
14 years ago I sooo Hope its a different show...Gladd to see Aamir