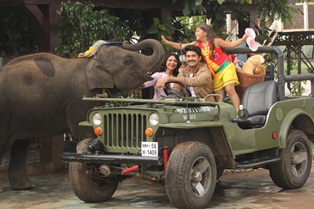 Zee TV's latest primetime fiction show Bandhan ... Saari Umar Humein Sang Rehna Hai, the first-of-its-kind to delve into an astonishing relationship between a little girl Darpan and Ganesha, a new-born elephant calf that she accepts as her younger brother, has opened up to a very promising viewership of 4366 TVTs, making it the second highest opening soap across GECs in the year 2014, second only to Zee TV's immensely popular Jamai Raja which had clocked in 5488 TVTs - the highest opening for a soap in the last 2 years!

With more and more viewers tuning into sample this heartwarming story of sibling love between man and animal, Bandhan's launch day ratings of 4325 TVTs have seen a day-on-day increase, closing the week with 4711 TVTS on Friday.

Zee TV's fiction line-up is growing from strength to strength with one successful launch after another. With Kumkum Bhagya seeing a 171% growth  during its shaadi highpoint (first 4 wk average: 2963 TVTs  & the Shaadi event: 8043 TVTs) and gaining slot leadership in week 34, Jamai Raja emerging as the quickest gainer and attaining slot leadership within 3 weeks of its launch and Jodha Akbar being the consistent slot leader for over a year now, the channel clearly rules the weekday primetime!

Zee TV Business Head Pradeep Hejmadi says, "The consistent growth of our fiction programming speaks of our relationship with audiences that has only evolved and strengthened over the years. Telling extremely relatable stories that represent the core fabric of contemporary Indian culture, Zee TV's shows have not only struck a chord with the viewers - but given them role models to look up to and fascinating characters they wish they had as their own friends or family. Zee TV represents hope - every story resonates with our core proposition of Umeed. While Jamai Raja challenges conventional mindsets by placing the responsibility of stringing a family together on the son-in-law instead of the bahu, Bandhan transports viewers to a very different world where man accepts an animal as a part of his family and explores the relationships that grow out of it.  We aim to further push the envelope by venturing into genres not attempted before and  stories told from a fresh perspective."

Creator and Producer Siddharth Kumar Tewary says "I had complete conviction in the thought of telling a human-animal story and the opening ratings are a clear indication of the same. We are happy that our effort of over 2 years is being appreciated by the viewers.  L'il Darpan & the baby elephant Ganesh's innocent bond of sibling love has struck an instant chord with viewers across all age groups. The journey of the Karnik family has just begun, more interesting facets of their bond with Ganesh are yet to be explored. It's a complete family entertainer. Keep watching...these unlikely brother & sister will become a part of every family."

Produced by Swastik Productions,  Bandhan transports viewers to a world significantly different from the concretized, urban world most of us inhabit. Set in a real jungle, the show follows little Darpan and her elephant brother on a journey of love & struggle in the big bad world. Stay tuned to Bandhan ... Saari Umar Humein Sang Rehna Hai  every Monday to Friday at 7 PM, only on Zee TV.