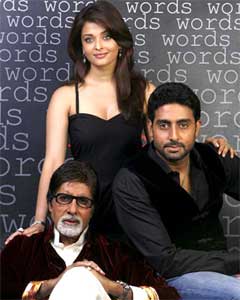 Whatever one may think of Raavan's failure, it certainly hasn't dampened Abhishek Bachchan's career!

Despite recent thrashings from critics on his performance, the actor has been approached with an offer of Rs 7 crores to star alongside wife Aishwarya Rai Bachchan and father Amitabh Bachchan in Rajkumar Santoshi's next directorial venture.

The trio, who have previously charmed countless fans with their Kajrare in Bunty Aur Babli and later shared screen space in Sarkar Raj, have apparently been very eager to work together again.

Whilst Abhi has yet to give his consent, we wonder if he really will say no?  After all, it's not every actor who is dished out so many convenient retakes?!
6 Likes