Aamir Khan starrer comedy-drama '3 Idiots' has created a record by grossing over Rs.100 crore in its first four days. Reliance BIG Entertainment, distributor of the film, released about 2,000 prints across 40 countries. 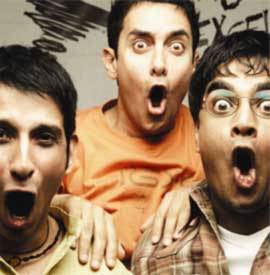 Featured Video
on Chetan Bhagat's bestseller 'Five Point Someone', the film has been produced by Vidhu Vinod Chopra and directed by Rajkumar Hirani.

'We are privileged to have been associated with '3 idiots' and its immensely talented team led by Vinod, Aamir and Raju. The ramp-up to Rs. 100 crore in 4 days is phenomenal and we are confident that the film will continue to blaze new records in the weeks to come,' Amit Khanna, Chairman, Reliance Big Entertainment, said in a statement.

Added Chopra: 'Response has been overwhelming from all over the world. Aamir, Raju and I knew from the responses earlier on that people liked the film but this is something else? We have got reports from places like Australia that they have reduced 'Avatar' shows and increased ours.'

'3 Idiots' is the highest grossing Hindi film ever in Australia on its opening weekend. Similarly in the US, I have been given to understand that '3 Idiots' would be highest ever for a Hindi film,' said Chopra.

The paid previews of the movie also garnered over Rs.9 crore worldwide, above those of the paid preview collections of 'Ghajini' that was Rs.7 crore globally.