2013 brought with it new fashion trends, be it neon colors, denim on denim, crop tops, trench coats or tube skirts, B-Town saw it all. Most Tinsel Town celebs hit the bullseye, but some went terribly wrong. BollyCurry gives you the low-down on the worst dressed celebs this year.
Rani Mukherjee 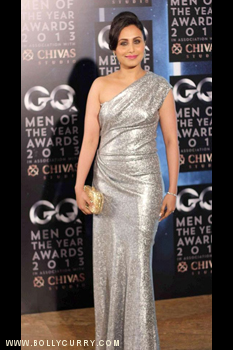 Ms. Mukherjee and the color silver make a bad combination, if Karan Johar's 2012 birthday bash is anything to go by. But this time, Rani broke another fashion rule as she wore a modified version of Donna Karan's original dress at the GQ Men of the Year awards. Adding to the look was a golden clutch, which was actually rather eye-catching on its own, but combined with the dress, she broke the cardinal gold-silver rule and resulted in looking like a Christmas tree.
Ameesha Patel 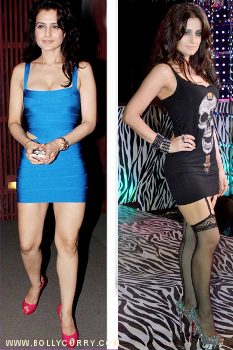 Lesson 1 - Light foundation maketh a ghost.
Lesson 2 - Short clothes don't always equal hot!
Ameesha went overboard trying to sell her sexy kitten look in 2013 and failed miserably at it. The first chance to witness her failure was at Farah Khan's birthday party where she wore a Herve Leger bandage cutout dress that ended mid-thighs. While we like the pairing of hot pink heels, the look in itself just was too much leg. Second came the Gothic avatar at the curtain raiser of her first production, Desi Magic. We have no idea what is happening here besides the fact that it is all kinds of wrongness in one package. Time to relearn the lessons, Miss. Patel.
Parineeti Chopra 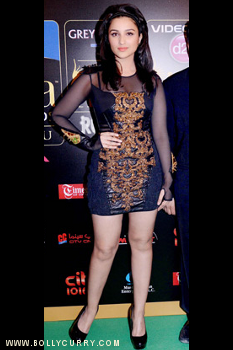 Why are nearly all good actors bad dressers? At the IIFA Rocks event, Parineeti was seen in a Falguni and Shane Peacock dress that ended above her thighs. It's a nice step out from her comfort zone but we're not impressed. Wearing her hair down with a band to keep the bangs out of the way was the wrong choice. A sleek ponytail would have served the dress better. Those black pumps were also a major letdown. And can the teapot pose please be a thing of the past!
Vidya Balan Kapoor 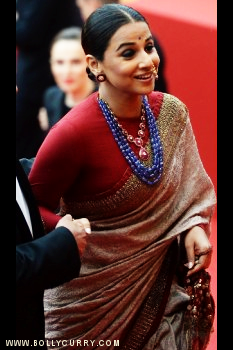 Mrs Kapoor's love affair with the box office ended with Ghanchakkar. The affair with bad dressing, however, is for keeps. We're ready to pass off the gaudiness during the Ghanchakkar promotions as being "in character" but nothing can explain the out of place grandeur at Cannes 2013. Amongst her various outfits, the one that stood out from the crowd for all the wrong reasons is the the Sabyasachi saree she wore at the screening of Young and Beautiful. The nath was too big and the bun too slick. Definitely not the standard of Cannes.
Sonakshi Sinha 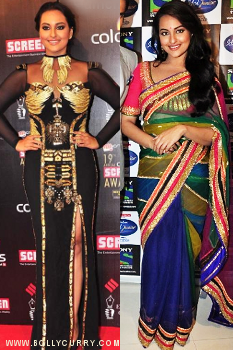 From an Egyptian mummy to Mandrake the Magician, Sonakshi Sinha gave us a lot of variety this year. Sadly it was all off-screen and none too appreciative. Despite being a stunning gown, the Falguni and Shane Peacock creation was definitely not for Sonakshi. The mish-mash of electric colors in the Abu Sandeep saree is what really got our goat though. She can add these to the ever-growing list of 'what NOT to wear'.
Aishwarya Rai Bachchan 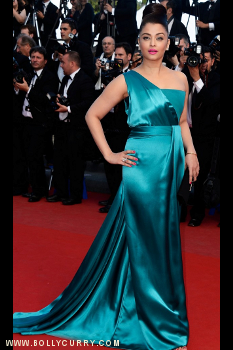 Mrs Bachchan's Cannes hairdo was a pet peeve of ours. Of all the different sightings, the hairdo that accompanied the teal Gucci Premiere gown at the the premier of Cleopatra, is what made say "seriously?". The satin rich dress with those lush pink lips we pass off with reluctance. But the updo, which literally sat like a bowl on top of her head, was just plain weird. We'd have preferred this look more if the bun was softer and low.
Ranveer Singh 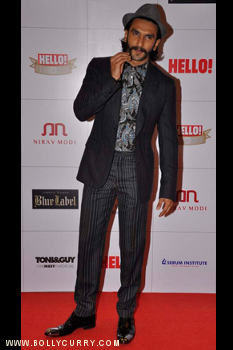 Ranveer Singh is the modern day Govinda. From the dhinchak dance steps in his latest hit Ram-Leela, to the busy and colorful shirts he wore while promoting it, everything was a match. At the Hello! Hall of Fame awards, Ranveer attended branded in Vuitton - a striped suit with a paisley shirt. It's fun and keeps us guessing his next appearance but oh, how we wish he followed the "keep it simple" formula sometimes.
Sridevi 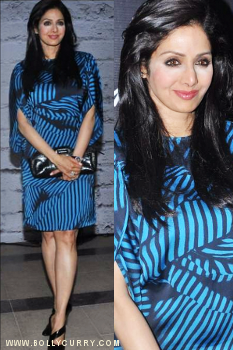 Stella McCartney is one name you must have in your wardrobe but even that couldn't save Sridevi from make-up mishaps. At the launch of Koecsh, her badly concealed face had us horrified. But that wasn't the sole issue. The heels that she paired with the striped outfit along with that boring clutch were, well, boring! The mismatched accessories and footwear are becoming more frequent in her recent looks and we're becoming worried.
Aamir Khan 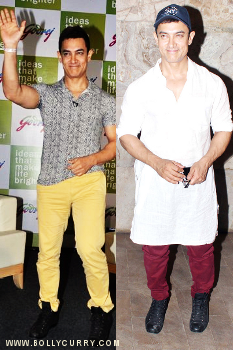 We are all for quirkiness but Aamir's pop coloured collection of jeans is so last year. It all started at the Satyamev Jayate press meets in 2012 when colored denims were the latest fad. Aamir, however, refuses to go back to the basic blue till he's completed the 'perfect' rainbow. To demonstrate the point, seen at two different events, Aamir paired his coloured jeans with a too-short tee and also with a plain white kurta. We won't go into specifics but that hat and shoes need to go. Pronto.
Ekta Kapoor 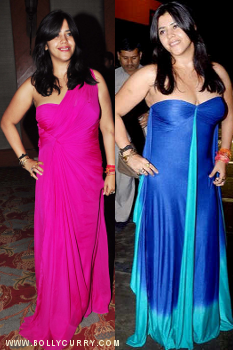 If it's a Malini Ramani, it's in Ekta Kapoor's wardrobe. We've seen her wear the same black wedges and hair with the same dress in different colors and at different events. Why does she insist on wearing this look to death? Someone needs to get her to read what William Cowper says about variety being the spice of life.

With new year around the corner and the world preparing that dreaded resolution list, we hope the above celebs' New Year resolution includes keeping it stylish always. While we wait to see if they pick up a tip or two, here's wishing the readers a happy and fashion-filled New Year!