Rubina was born on August 26, 1987 in Shimla, Himachal Pradesh. Her family owns an App]. Her father is also a writer and has written many books in Hindi.In young days, She was a beauty pageant contender, won two local beauty pageants and was crowned Miss Shimla in 2006. She was a national level champion in debate during her school days. In 2008, she won the Miss North India Pageant held at Chandigarh. 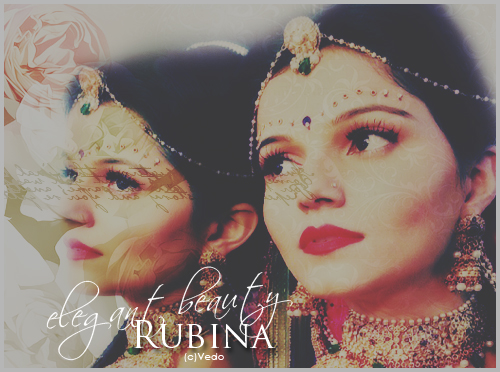 started her acting career from Chotti Bahu though she wanted to be an IAS and was preparing but got selected in auditions was held in Chandigarh.Dilaik gained recognition by playing Radhika Shastri in Zee TV's Chotti Bahu opposite Avinash Sachdev and reprising the role in the show's sequel. In 2012, she played Simran "Smiley" Gill in Sony TV's Saas Bina Sasural. In 2013, she played Divya Jakhotia in Zee TV's Punar Vivah - Ek Nayi Umeed opposite Karan Grover.From 2013 to 2014, she portrayed Sita in Life OK's mythological show Devon Ke Dev...Mahadev and Jeannie in SAB TV's Jeannie Aur Juju. From 2016 to 2020, Dilaik portrayed Soumya Singh, a transgender woman in Colors TV's Shakti Astitva Ke Ehsaas Ki opposite Vivian Dsena.In 2020, she participated in Color TV's reality show Bigg Boss 14 along with her husband Abhinav Shukla.

Appreciation threads are to be used to praise and appreciate particular favorite actor/actress/characters.

All discussions related to actor's/actress performance, looks, style and personality can be confined to  ATs.

Further violation- The DT members will close the AT

DT will HAVE to close it.

Some Rules that are not to be breached

No Bashing: India-forums.com Code of Conduct strictly forbids members from bashing fellow members, DT members and celebrities.   This includes the use of foul language, as well as any personal remarks, i.e. how the actor looks like, as they have no control over it! We welcome members to share their constructive criticism on the absurdity of the series's story line and character, as well as to discuss the actor's talents, however, please refrain from engaging in any kind of bashing, which may have severe consequences

What some of you are doing is breaking the COC.

Personal attack: Each and every one are entitled to having their own point of view, likes and dislikes. Differences in opinions are bound to exist in a forum like India-forums.com. However, this does not permit one to attack their fellow members for not sharing the same point of view. Let us respect our fellow members and refrain from making any provocative statements, which may only lead to unnecessary quarrels.

Members come here to relax and unwind. Quoting some one's post and making a harsh comment begets displeasure. You have no right to post any abusive, derogatory, insulting or sarcastic comments which is enough to hurt the sentiments of your fellow member. All these fictions are not worth hurting a fellow IF ian. Please do remember that!

Indirectly Mocking Opinions and Pinpointing: You all know exactly what we DT mean. It's been happening way to frequently here and will not be entertained. You are free to express your opinion and have a healthy debate with one another. However, mocking and posting instigating remarks on one's opinion will not be tolerated. If you are going to make a topic and mention "Oh, I don't get how many people think XYZ/ABC are ___" or "I have been seeing that many people are opening topics based on _____" or "WTH? How can people not understand that ___ isn't ____ and like do they not understand the show?" That means that you cannot mock/mention other member's opinions in your topics. If members want to speak they can do it themselves. You cannot be like - How mature or immature fans thinks, or how their opinion says a lot about them, how stupid and what not. All these shall not be entertained any more. You want to express your opinion, please do so in a civil way and do not bring in Freedom of Speech as Human Rights when the whole meaning are simply misinterpreted according to one's benefit. We DT respect Freedom of Speech but one should also be well enough to judge on if they have used their Rights of Freedom of Speech responsibly. Any individual and topic seen mocking opinions and pinpointing will see a direct warning level increase of 20% and the topic shall be closed.

Name Calling: While criticizing something, there are times when members tend to go overboard and use certain derogatory and downright offensive words which shouldn't be used for any celebrity/member/DT member. Please remember that any derogatory references, comparing celebrity/member to animal or name calling any person [celebrity/member/DT member] is against forum rules, and strict action will be taken against those who indulge in it. Name calling is allowed only and only if it is used to describe a character or his/her behavior. Also, names used in the show can also be used given it is used in context of the show or particular scene it was used for and not otherwise to take dig/mock the character. Any abusive names are not allowed and will be edited or removed at the DT's discretion.

No Slangs/Swear words/Curses/ Profanity in Posts : The use of foul language is STRICTLY PROHIBITED on the forum. Whether the word is written in its complete format or abbreviated, it is still not allowed under any circumstances.  This is a family friendly forum. Hence, anyone found using swear words, curses, slang's or profanity will have to face serious action. If members do come across such language please do report the post.  Use of such language will lead to warnings and warning level raised for repeat offenders.

No Moral Policing: Everyone is welcome to express their opinions within the forum rules and IF COC. We would prefer members to stop preaching on the forum telling members what to do what not. Let the moderators decide what is needed on this forum and what is not or what one member is allowed to do or not. You cannot stop someone from posting in any topic or making new topics. Do not become a moral police on the forum. If you find anyone breaching rules, please Report the topic and or contact the GMs.  We will deal with the issue at the earliest possible.

India-Forums is a platform to allow everyone to express their opinions freely within the COC and respectable limitations. Members have the freedom to express their own perspective, which may disagree and or contradict someone else's point of view.

Sharing Personal Information and Privacy: You are welcome to discuss PROFESSIONAL updates by the celebrities and production house associated with SBRK but any PERSONAL photographs and updates will NOT be allowed on IF either. They may be celebrities but everyone is entitled to their privacy and as such that right will be respected.

PS - ONLY Above Members Can Participate In This AT

Rubina Dilaik AT #2 She Who is Both Furious and Magnificent |

yayyyy congoooo !!! Probably our last AT for Ruby

Jasmin Bhasin and Aly Goni all set to do a music video with ...

Disha Parmar and Rahul Vaidya on realising their love, what ...