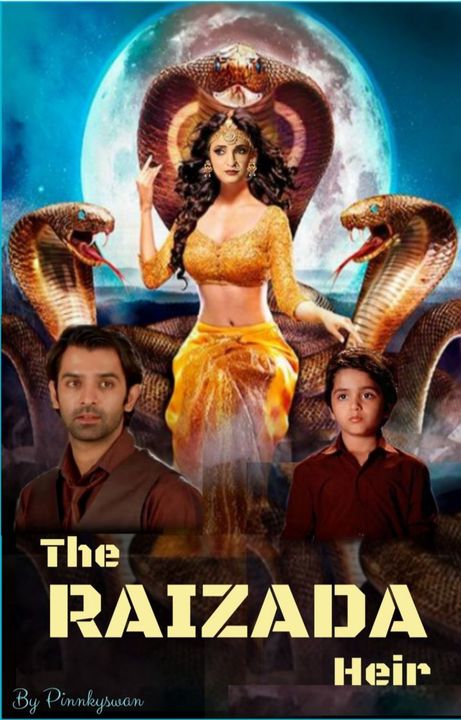 The lavish wedding of ASR with Sheetal Khanna, got cancelled when Khushi and Aarav reached the venue, claiming to be his wife and son.

Is Khushi saying truth or Arnav is lying? Will Arnav accept Aarav? What is the mystery behind the Raizada heir?

After experimenting with ghosts in Kara Sevda, this is another supernatural story of Naagin world.

My Booklist on IF

Edited by Pinnkiswan - 2 days ago
2 Likes this
REPLY QUOTE

The priest chanted the Vedic Mantra as the couple stood up to take seven pheras around the sacred fire.

That's when she entered in, clad in a red saree, moving gradually towards the Mandapa, her brown eyes going green for a moment, as she entered the human realm.

'It will be fun to play with you Raizada!' She smirked as her anguine genes activated.

The lustrous wedding of the business tycoon Arnav Singh Raizada, arranged to the daughter of Khanna Industries, Sheetal was all set to happen. Devyani Raizada the head of family was sitting ahead along with her family.

Amid all the grandeur, splendor and magnificence to match their standards, the marriage was attended by all the renowned personalities.

As the priest indicated, Arnav held Sheetal's hand to take the first round around the kund, but the next moment her voice made them stop, "Arnavji..."

Masking her emotions, her beautiful innocent face was brimmed with tears, as she moved ahead, "Arnavji, please stop this marriage...At least think about our son!"

Khushi was holding the little hand of 5 year old Aarav, who was standing with a scowl.

"Son...." Sheetal looked at Arnav in astonishment, bringing him out of shock as he left the stage in anger.

"You, who let you in?" Arnav was perplexed at the sight of her. He had not expected her to reach his wedding.

"Where the hell is Security? Remove her from here!" Arnav roared, as the guests looked in confusion.

Before guards could touch her, Khushi reached Devyani Raizada, clutching her legs, "Naniji, now only you can give me justice. Your grandson is going to do another sin!" Khushi was leaning down with her hands folded, helplessly.

"Don't come in her words Nani. She is fraud! Has been troubling me since last few days." Arnav came and pulled her to stand up, his death grip on her arms, as she struggled to get free.

"No Naniji, he had married me 6 years ago, and then left me with that symbol of our love!" She beckoned towards Aarav.

"She is doing drama, Uncle!" Arnav didn't let anyone speak anything, as he took her away.

"Arnavji, you are hurting me!" She was being dragged to the exit by a furious Arnav.

Before he could push her out, the five-year old Aarav, came running pushing him with his small hands, "ASR don't hurt my Mom!", his strong tone, and fire-shot eyes made Khushi panicked while Arnav fell down.

Getting knocked out by such a small kid was unusual for Arnav, but he ignored it, more pressing matters before him.

"Whole family into acting!" Arnav's voice was full of venom as he screamed at Aarav, "You little piece of....!"

"Arnavji, he is your son!" Khushi pulled Aarav behind her, before he could be hurt, as Arnav got more angry.

"Enough of your maneuver. You want money! You will get it soon." He whispered ragingly, "Now get out from here, before I call Police!"

"You don't need to trouble yourself Mr. Raizada!" There came the voice of Police Inspector, Nand Kishore. "Police has been called." Arnav was stunned, seeing NK after so many years.

"Already having a wife and son, you were going to marry again. Bigamy is a crime under IPC Section 494!" NK had a mirthless smile, seeing expressions of Arnav.

"She is not my wife. I even don't know her." Arnav shouted coming out of shock. He had  seen Khushi first time two weeks ago.

Ignoring Arnav's outburst NK went to Devyani, "Mrs. Raizada, we have got a complaint against your grandson!" He handed her some photographs of Arnav and Khushi's marriage.

"Those must be forged, not a big deal now-a-days!" Arnav tried to protest.

"To know truth with valid proofs, we need a DNA test of you and your alleged son!" NK addressed Arnav, "Sorry to say but till then, this marriage can't happen!"

Arnav was angry on the turn of events as he threw his turban on the ground, while guests started departing back.

"You both will live with us till everything is clear!" Devyani said to Khushi to avoid involvement of media, much to the annoyance of Manorama and Arnav, while Khushi smirked at the success of her first plan.

"Naniji!" Khushi stood up when she saw her on the door of the guest room.

"Khushi, that's your name!" She saw the beautiful and virtuous girl nodding at her question. 'Is she really saying truth or it is a plan to trap Chhote!'

"Sit!" She said as she relaxed herself on the sofa. "How did you and Chhote meet?"

Khushi looked towards the older woman. Gulping her tears she started, "We had met in the wedding of my friend", she replayed their accidental meeting and immediate attraction.

"He told me that it was love at first sight!" Khushi told her how he proposed marriage after a week. "I was an orphan, so marriage was a private ceremony!", Khushi breathed a little, "After two months of our marriage he disappeared, neither his phone not he was reachable!" Her eyes were teary.

"Didn't you try to find him?" Devyani asked suspiciously.

"He didn't tell me that he was a Raizada!" Khushi wiped the lone tear slipping from eyes, "I had reported his missing complaint to Police, with his pictures, but no one recognized him in the small village! I was helpless with little Aarav... " She had started sobbing.

Nani stood up to console her, but before that Aarav was wiping her tears.

"Mom, please don't cry. I don't like it." The little boy was genuinely worried for his mother, as Devyani saw him adoringly.

'He is replica of Arnav!' She remembered, 'Same eyes, same anger!'

Suggesting them to sleep, Devyani came out of room, determined to right all the wrongs.

"Manohar, get those pictures to the Forensic for being tested, check if they are tampered with!" She commanded her son.

"There is no peace in my life!" Manorama Raizada was seething with anger, since Aarav and Khushi were brought to RM.

"Mano, what can we do if Arnav was already married?" Manohar tried to make her understand. She was angry as Sheetal couldn't get married to Arnav, "Your niece Sheetal can get married to Akash!" Manohar mumbled.

After his sister Ratna's death, her two sons Arnav and Akash had been his responsibility, but his wife was not happy with it.

"First your mother handed, your father's company to Arnav although you were its rightful heir!" Manorama charged on her husband, ignoring the fact that Manohar or Anjali were never interested in business, "Then my only daughter Anjali was tied to that good-for-nothing Shyam!"

Manohar sighed as his wife again started her favourite discussion. "Did you forget, our daughter had a love marriage!" No one could do anything, when Anjali was not ready to listen.

"Mano, Arnav and Akash consider us as their parents!" They had even changed their surnames from Malik to Raizada, "At least think about them once in a life, without being selfish!" His wife didn't care of anyone.

"Whatever, but I want Sheetal as Raizada bahu! I won't let that Khushi to be the queen of Raizada Mansion!"

Manohar rolled his eyes on Manorama's childish talk. 'Queen of Mansion??' Those Star Plus serials had spoiled her mind.

It was not some hyperbole but a fully proven fact. The world knew how ASR could change anything as per his wish.

But yesterday it went wrong... drastically wrong. His marriage got cancelled, the business treaty with Khannas went in uncertainty and the shame and embarrassment for the Raizadas before society was another thing.

He threw down the glass bottle of liquor which was his companion of last night. He had come to his office, directly from the wedding venue, after Nani had decided to take that girl to Raizada Mansion.

'Just Great!' He had to now bear that fraud in his home, 'I should not have taken her so lightly.'

He remembered the envelope she had left for him at AR's reception three weeks ago. It consisted of a letter and their pictures together. He had taken her as some fan-girl.

"Did you forget me Arnavji?" The only line in the letter read. He thought it to be a prank by someone, too trivial matter to get concerned.

And then the following weekend at the Ahujas Party, when he had went to washroom to clean his spoiled shirt, she had appeared behind him suddenly, "Do you need help?"

He was startled to find the same beautiful lady from those pictures behind him. He was confused as he had asked in his cold tone, "Who are you, have we met earlier?"

"Did you really forget your wife Arnavji?"

"What the fuhck?" He was annoyed, "Did you even know who I am, before playing this prank?" He had lashed out on her but she had that calm smile on her face.

"Don't worry, we don't do pranks on people!" She had whispered, "We only take revenge!" She had spoken in his ear, as her eyes shone green for a moment. Before he could probe her more, she had vanished out.

He had not understood her motive then but now he was sure, she had a deep plan.

Arnav dialled on his phone, to hire the best men to know about Khushi, "I want to know everything about her, find every record, every file from any corner of the world!" He barked on his bluetooth.

She was plotting something for sure, 'Is she behind my money?', he had to find out.

Edited by Pinnkiswan - 25 days ago
39 Likes this
REPLY QUOTE

Another amazing story from you Pinky 😍

Omg I literally screamed when I clicked on the title, lol! I have a bad condition of ophidiophobia, fear of snakes and as I saw the banner, mannn, you can only guess 😂

Coming to the story, it seems an interesting one. I’m pretty sure Sheetal is the snake here and has probably hypnotized Arnav. Oh Khushi, 😩 my poor Khushi and her little boy! I can feel her pain 😢

Excited for the coming updates.

She mentioned revenge. What did he do?

The banner with two snakes and sanaya just cracked me up

Interesting story. Loved  the update. Waiting for the next update.

Interesting story. Waiting for the next part...