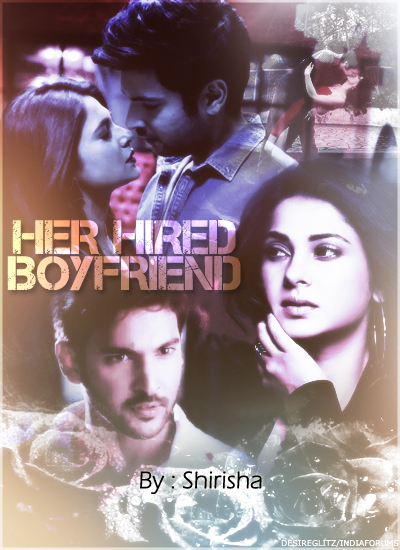 Rudra sat near the window of the room, lost in his thoughts. Can love be forced? Can you love someone who you just met yesterday?

Love has been always pure for him. And sex, it has been always been lovemaking. But he had never thought that he would have to pretend to be the boyfriend of the girl he slept with after a drunken mistake; he didn't remember how he ended up sleeping with her.

After she had forcefully hired him to become her boyfriend, he had realised that his boss was a money minded businesss woman who thinks only about profit and gain. The only thing she loves is money and only money.  Rudra wanted to hate her. He had always believed that it is easier to love someone you respect. But perhaps it is also next to impossible to hate someone you respect. And he respected her, a lot.

And he didn't like that. Why couldn't he hate the womam who took away his independence and forced him to make a joke of a pure form called love and relationship? He only wanted a simple life, a loving girlfriend, who will become a caring wife later.

A hand snaked around his chest pulling him behind. It didn't take him a moment to guess who it was. He pulled away, walking away from him, only to have her grab his wrist.

"I will runaway, the first chance I get. I surely will." he promised her.

"And I will find you, no matter where on earth you go." She answered back kissing his cheek softly making him close his eyes.

Maya pushed Rudra lithly onto an antique rocking chair. Swiftly pulling herself into his lap, she held him tightly as he squirmed trying to get away.

"You enjoyed being in my arms a lot last night." She mused, Rudra stilled himself.

"Let me go please, boss." he almost requested. "I can't be your hired boyfriend."

Maya got up from his lap and waved her hair in attitude.

She turned on the TV and signaled him to look at it. Rudra turned around to find the TV flashing with the news:

Maya Jaisingh to introduce her boyfriend to the media today.

"What the hell is this!" Rudra yelled. "Are you serious about this? I am not going in front of the media."

"Isn't this the same man who has signed the 5 year agreement with me, saying he'll do whatever to be in my good books? Saying he needs this job to raise his little brother? Isn't-"

"What are you trying to say?" Rudra asked with anger flooding her eyes. "You're gonna fire me if I don't agree to be your boyfriend?"

"You're smart enough, Rudra. Just remember that you have a 5 year contract with the company and if you want to leave the job you have to give a prior notice or, you have to summon an amount of 10 lakhs if you decide to quit right away." She said calmly.

"Why are you doing this?" Rudra sighed.

"Learn to be a good listener first, boyfriend. It is going to help you a lot. Get ready by 4 to be introduced."

Maya held Rudra's arm as he walked with her, he lowered her gaze feeling the zillion cameras flash in his face asking numerous questions.

"Look into my eyes." He heard her whisper.

He lifted up his gaze and Maya looked at him too. They both walked and sat on their seats and continued staring in each other's eyes. Maya was smirking, while Rudra was smiling awkwardly.

"Miss, we heard he is the manager of your company?" the interviewer started, but Maya kept staring in Rudra's eyes.

"Huh?" She broke out from the staring session and half-smiled.

"Yes, he is. Meet Rudra, the love of my life. And I am soon going to be Mrs Maya Rudra Roy." She snickered and held Rudra's shivering hand.

Rudra was already nervous and it made him more nervous when she used his surname. Marriage is a sacred relationship and how can she say about it just like that?

"Right now, we were living in." Maya smiled at the media.

Anger, rage would have been an understatement to describe the dangerous feelings developing in his mind after the bitter reality struck him. She was using him for her own benefits. She had forced him into this live-in.

After they reached Maya's house, Rudra pulled her and almost pinned her to the wall, still keeping a distance from her.

"Why are you doing this?" He asked. "I don't love you, you don't love me, then why this boyfriend girlfriend crap?"

"Easy, boyfriend. We have all the night!" said Maya, while dangerously moving close to him.

"Miss Jaisingh, first of all, stop calling me that and joining my name with yours. Our relationship can have only one name, Hatred!"

"Okay, that's good. Join me in the bed in five." She ordered and left to her room.

Rudra stood still. He couldn't believe what was happening. He decided to find how he ended up in this mess and why.

What do you think is the reason behind Maya's decision of hiring a boyfriend for herself?

What will Rudra do now?

Edited by ShirishaTeddy - 2 months ago
14 Likes this
REPLY QUOTE

love it so far... waiting for next update

Especially join me in bed

Why Maya needs a hired boyfriend

Yoo! This is fire! 🔥🔥🔥 I love the concept and how the characters are set up! I hope you continue this story! ❤️

Oops rudra is in Maya’s trap

He have to pretend her boyfriend

Poor rudra how he gonna refuses his boss?

Wow, I love the prologue

love it so far... waiting for next update

Shivin Narang: I love playing the character of Rudra!

Ankit Siwach To Play A Negative Character in Beyhadh 2

'Beyhadh 2' To Not Go Off-Air & Not Going Digital Too