EXCLUSIVE: IT'S 'DIDI TERA DEVAR DEEWANA' IN REVERSE FOR SALMAN KHAN AND KATRINA KAIF IN BHARAT 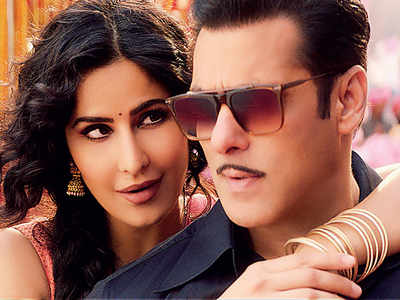 Katrina Kaif and Salman Khan in the song

Salman Khan and Katrina Kaif’s equation in their upcoming release, the Ali Abbas Zafar directed Bharat, has stood out with a sequence which shows the leading lady one-up the actor, even spawning a wide range of memes. Now, Mirror has learnt that the actors are taking it up a notch with the song “Aithey Aa”, a peppy dance number that is set against the backdrop of a wedding.

Ali informs that it is a celebratory track set in the 1980s. “Usually, in such a set-up in Hindi films, you see the boy teasing the girl, but because Katrina’s character (Kumud, also known as “Madam Sir”) here is as strong as Salman’s (the titular Bharat), the whole song was written from the point of view of women teasing the men,” the director reveals.

He goes on to add that the song is composed by Vishal–Shekhar while Vaibhavi Merchant has choreographed it. “Irshad Kamil has beautifully captured the flavour in his words. Just imagine, if “Didi Tera Devar Deewana” was reversed with Madhuri (Dixit) and Salman switching places… that’s what our song is. The brief was to create a peppy dance number with the entire family shaking a leg,” Ali explains.

Sung by Akasa Singh, Neeti Mohan and Kamaal Khan, the number was shot at Filmcity in Mumbai in January on a massive set with flowers and over a hundred background dancers. This is Ali’s second track with Salman to be set against the backdrop of a wedding after the 2016 hit “Baby Ko Bass” from Sultan.

Mirror was the first to report (April 2, 2018) that Salman Khan will shoot for a recreated version of his 1998 chartbuster “O Oh Jaane Jana” for Stanley D’Costa’s Time to Dance, which marks Isabelle Kaif’s acting debut opposite Sooraj Pancholi. Now, we have learnt that the song will be shot in the coming weeks and will be choreographed by Race 3 director Remo D’souza.

A source says, “While the team is waiting for a confirmation from Katrina, Salman will soon be shooting for the song at a Mumbai studio. Incidentally, it will be a concert sequence, quite like the one from the original in which he is seen performing on stage. This time, Salman will be joined by a bigger number of back-up dancers. Sooraj and Isabelle will also be a part of the song.”

Interestingly, another version of “O Oh Jaane Jaana” was shot with Sooraj and Isabelle in central London last year. It will serve as the actor’s introduction number in the film and features the hook step from the original. It was also choreographed by Remo.

Wtf who in their right mind would give sooraj oh oh Jane jana?

Salman is another level of something else altogether.