Kriti Sanon and Aditya Roy Kapur to romance in Vashu Bhagnani's next?

Kriti Sanon and Aditya Roy Kapur to romance in Vashu Bhagnani's next? Every year we witness a lot of refreshing jodis in Bollywood films and this year has been no different. After seeing actor jodis like Ayushmann Khurrana-Parineeti Chopra, Kriti Sanon-Sushant Singh Rajput, Akshay Kumar-Bhumi Pednekar among many others, Bollywood may soon get yet another new jodi on the big screen.
If reports are to be believed, then Kriti Sanon will be seen romancing Aditya Roy Kapur in an upcoming film that would be produced by Vashu Bhagnani.
According to a trade magazine, Vashu Bhagnani has signed in a debutant director from the ad world for his next venture, that will be produced under his banner Puja Films.
We tried to get in touch with Vashu Bhagnani to get a confirmation on same and are still awaiting a revert on the same.
A source close to the director said that he doesn't want to comment on this news. He will neither confirm nor deny it, till things are official. A source from Kriti's team too hinted at this collaboration and the modalities are being worked out.
If the film works out, it would be interesting to see Aditya and Kriti together!
While Aditya Roy Kapur was last seen in Ok Jaanu opposite Shraddha Kapoor, Kriti Sanon is currently gearing up for the release of Raabta along with Sushant Singh Rajput. She also has Bareily Ki Barfi opposite Ayushmann Khurrana and Rajkummar Rao.
1
REPLY QUOTE

There's no doubt they'll look hot together but Aditya is one lazy actor who lacks spark to be the main lead in films. He comes in films, vanishes, and then you hear about him a year later. I hope Kriti rejects this film because she can do so much better than the likes of Aditya and Vashu Bhagnani. I would like to see her act opposite Ranbir and Hrithik or even Salman. She needs to be careful about her projects after Raabta.
3
REPLY QUOTE

They will look so good. Mr. Laidback and Ms. Ambitious. Nice pairing. 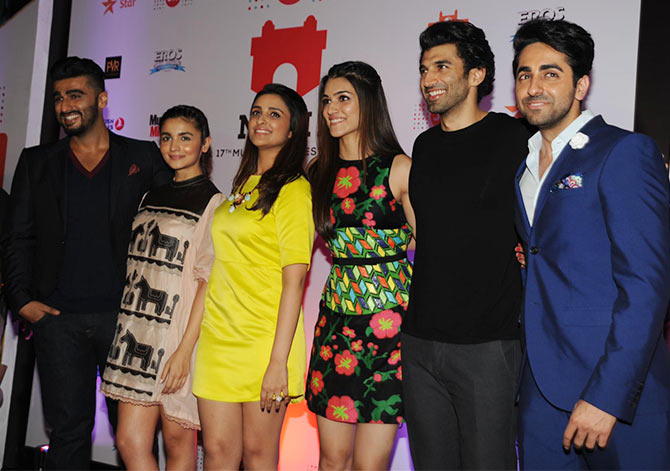