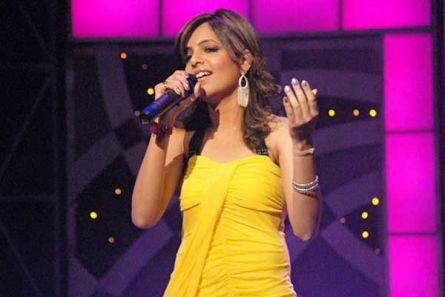 With Sugandha out, Sa Re Ga Ma gets its top three finalists

She escaped eviction last week but looks like her soulful renditions with Richa Sharma didn't quite impress the viewers as they put her on the elimination block this week. Sugandha Mishra is eliminated in this week's episode of Sa Re Ga Ma Pa.

The top three finalists are now Abhilasha Chellum, Kamal Khan and Bishakh Jyoti. Says a source, "Sugandha was in the danger zone for the past couple of weeks and this time she was evicted. The finale will be held on December 25. This Friday episode will see Zee's four popular bahus -- Ankita Lokhande (Archana), Binny Sharma (Gauri), Suhasi Dhami (Abha) and Ratan Rajpoot (Laali)."

.
I guess she too knew that she was going next

...these days the shows don't even make any pretense of fair play..
Will really miss her..such a joy to see her on the show and watch her sing..smile...
I think we are going to see(and hear) a lot more of her..what a multi talented girl..

I knew it Sugandha will be eliminatd this week...now chances for for Bisakh Jyoti is more bright...
1
REPLY QUOTE

so very contrived, one from each gharana. bloody bull crap all this is.
so fixed!!!!!
am quite dejected.
I felt that bishakh deserved to go and she in fact deserved to win as much as kamal!!!!
4
REPLY QUOTE

I knew that ! Since they dont wanna eliminate any gharana b4 finale it was 100% sure that Abhilasha and Bisakh are gonna be in finale   and the toss's between two hit squad members

and though both kamal and sugandha equally deserve to be the finalists;  Since Kamal's vote bank is stronger than Sugandha it was quite obvious that she would have to say good bye this week

. But neevr the less this is definitely not the end of the road for a multitalented girl like her ; she is gonna rock in coming years .

That is bad.I wanted Sugandha to be in the finals along with Abhilasha.in fact I would have been very happy if all the 3 girls were in the FINALS.
3
REPLY QUOTE