Chapter 3: The Descent Of Divine Love

The Descent Of Divine Love 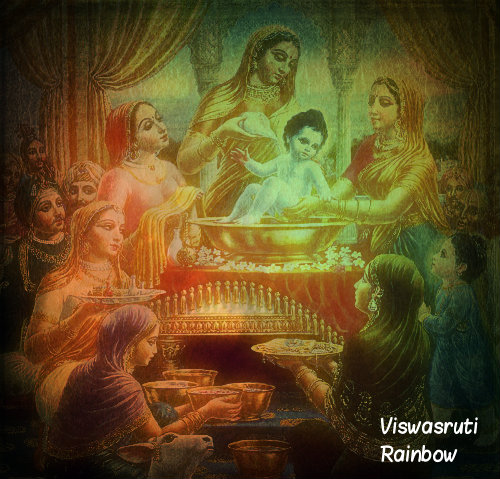 It was a new dawn, a new life for many...the most amazing moment of birth of a day! The cow herding village, Gokul was slowly opening its eyes in that early morning!

The housewives were just opening the doors of their houses to clean and decorate their front yards with colorful designs.

The good news was in the air and was already spreading like lightning in the entire village!

The path leading to the village head Nand's house was filled with hoards of people, the house was abuzz with animated voices ringing excitement from the inner part of the house. Everyone was hurrying towards the source of the news. Some people asking others ---

Is it? Who told you? I heard his color is black but very attractive!"

A lady with a curious frown ...'"Do you know Dhaatri? When I went near the baby... he smiled at me as if winking at me ?"

"Maybe it is my illusion, Gagan Sundari !"

"Madhavi, you are young and youth invokes many silly chaffy expressions! But see that girl  Vishnu Vandana... she is not even noticing that her veil is not on her bosom!  That lady... not bothering about her clothes, see how she is running to see the infant!"

"Oh! She is none other than our own Radha, running as if captivated by this news to see that new arrival !''

When they reached Nand's house, a big crowd had already gathered there.  Village head Nand was standing in the front yard receiving each guest with a hug, who in turn was greeting and praising him for having such a cute and charming kid.

One villager said -- "today we do not light a cooking fire in our houses ... our village chief organizes a party for the whole village!!" Nand nodded his head cheerfully.  A festive atmosphere encompassed the village and there was a buoyant mood, and everyone was celebrating!

" Do you know Dau, this morning when I was up to milk my cows, I noticed that the entire cow shed was wet with streaks of milk on the floor... all the cows were shedding milk as if they are purifying the earth...devoting it to someone. Never saw such a wonder !"

She heard the news, unknowingly running towards  Nand's house with a  passionate eagerness!

Her face was covered with sweat, her frizzy black hair stuck on her forehead, she was breathless, stood there --wonder struck, looking at the charmingly dark, mesmerizing and  enchanting kid with a wondrous aura smiling at her!  Krishnaa ...'  a sweet cry from her heart that resonated in her soul!

She was there looking at him, at his captivating looks,  unable to turn her eyes ...stranded!

"Radha! You are so late! See, your nephew is looking for you as if he is waiting for you for long ! "  Yashoda smiled teasingly.

Still, she stood there, awestruck!

"Don't stare at him without blinking, girl!  It may diminish his charm!  Don't you know infants are considered as God ?"

"He himself is a God, descended from heaven for me!" ---  she said mumbling to herself.

"Ha, Ha, ha .who will be able to see him with an evil eye? He is as vivid as a sky, how will you be able to hide him? We are so lucky to witness this wonder,  Daadi !"  Radha said with an exalted smile on her face.

One old lady said, "see this fanatical   Radha, she lost herself to that charming kid! Move aside, give us a chance to see him !"

"Who am I to allow you to see him,  Kaki? He is here to elevate our fate, how can I  deviate my eyes from him? He tied my soul with his magnetic eyes! Where I have to go now? Leaving him behind ?" ...  And said to herself now-- 'there is no Radha, only a lovelorn  Gopika stood here, waiting to be noticed by Him!'

Suddenly the infant started crying,  Yashoda was still lying on the bed,  with her weak voice, she asked - "Radha, take him into your hands, please!"

She lifted the kid, took him into her hands, and hugged him to her heart. His hands touched her bosom as if he is touching her soul, he locked his eyes with hers as if asking for her association for lifelong! [ till the Yugaanth]

"What is this? He was born only a few hours back, how he is able to convey his thoughts to me Yasoda  Bhabhi?"

Someone teased Radha - "when are you going to gift a child to your man, Radha?"

She smiled at her, but ignored her question and said--  "from now onwards this dark boy who was born in Krishna Paksha, in the waning moon time, will be known as Krishna "  and she hugged that infant with an endearment!

Nand stood there outside the door.  He said " Radha until now, you were roaming either on the bank of river Yamuna or in those whistling woods with Bamboo bushes! Yasoda ... hand over our kid to her  so that she will be home bound "

The kid in her hands smiled at her! Divine dawn touched her heart!  It was a defining moment!

An unending celebratory mood engulfed the entire village with music, dancing, and partaking of festivities on that eighth day (Ashtami) of the waning moon(Krishna Paksha) of Savan! 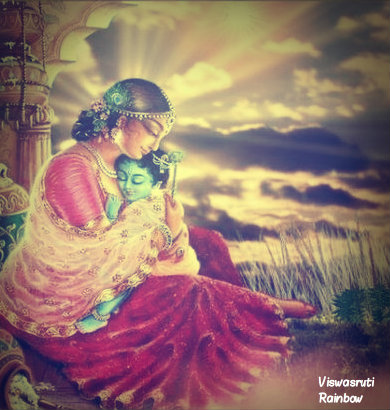 + 7
3 months ago Such a great start! You have a fantastic writing style. The first three chapters are a delight to read. I am in love with your way of storytelling. 👌👌

6 years ago Madhuri , waiting for the next update !

+ 6
6 years ago [QUOTE=Sneha...Love]Thank you for a link Madi Sorry for late reply Such a beautiful, enchanting Thread , I truly enjoyed in the story that you weaved so beautifully, and completely lost myself in the bee ginning of this epic, divine love between Radha and Krishna...Love to see it through your eyes and through your words...always loved the way you write, so vividly and so imaginative, so full with beautiful pictures that you created with your words .Love the prologue and that magnificent siggy there...such a beautiful poem that describes so well eternal love..Love both parts that you wrote, and the pictures that you posted...I am looking forward to all the other parts that will follow... [/QUOTE] Thank you Branka for your valuable opinion . Always love to read your views on any subject .Love is universal , divine and a base for a never ending story of life . Since centuries, sages and seers trying to explain this beatific and ecstatic love to mankind . But I feel there is so much yet to reveal , still to understand , that is the beauty of Radha Krishna love ! Thanks once again for your presence beside me in this IF journey .

+ 2
6 years ago Thank you for a link Madi Sorry for late reply Such a beautiful, enchanting Thread , I truly enjoyed in the story that you weaved so beautifully, and completely lost myself in the beginning of this epic, divine love between Radha and Krishna...Love to see it through your eyes and through your words...always loved the way you write, so vividly and so imaginative, so full with beautiful pictures that you created with your words .Love the prologue and that magnificent siggy there...such a beautiful poem that describes so well eternal love..Love both parts that you wrote, and the pictures that you posted...I am looking forward to all the other parts that will follow...

+ 6
6 years ago Avy , waiting to read your valuable opinion !

+ 6
6 years ago Divine love ! Didi , thankful to you for these good words for my simple writing .Getting encouragement from a learned and scholarly person like you is my fortune . This is my first attempt to touch a mythical story , on legendary love of Radha Krishna .Thanks once again for liking this piece of writing .

6 years ago loved the prologue and the 1st part

+ 6
6 years ago [QUOTE=ahilajkula][QUOTE=Viswasruti] To be continued ... [/QUOTE] Madhu, This is gorgeous. Inexhaustible topic for writing, for reflection, to talk ... for real life ... in one word: inexhaustible joy ...[/QUOTE]Thank you Ahila for liking my story ! Radha Krishna love story is an enigma , very mysterious to understand , but very enchanting ,can't divert our attention from it ! Some called it as forbidden love , some seers called it as Bhakti Vedanta Yoga , some sociologists defined it as a free society's relationship , the philosophers defined it as one of the most difficult puzzles to solve .But all accepted it as there is a special charm in their eternal love !