If you thought that the contestants of Imagine's Zor Ka Jhatka were just having fun on the water course in beautiful Argentina, then think again. 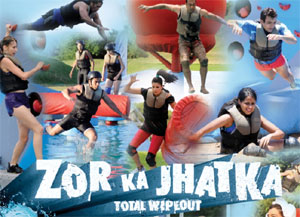 According to our source, "Most of the contestants had a jolly time partying in Argentina. There was a regular routine of wild alcohol parties, which went for 15/17 hours. As a result one of them even failed the mandatory alcohol test once, which is required before you can get on the course".

It is heard that some high-on-drink contestants even requested the organizers to reschedule their appearances so that they have time to sober up.

Our khabroo goes on, "The organizers got tired of this indiscipline, and apparently sent out a strong word that they are not bothered with what they do in their free time, but nobody can spoil the show".

The insider also gave us juicy details about certain committed contestants who really had a good time with members of the opposite sex. And we hear that one reality show regular, who is always in news for fights did not disappoint here as well.

While few were really enjoying the side entertainments, there were a handful of contestants who hit the gym regularly to prove their mettle in the show.. Well, the mixed bag does not end here, as few of them rather used the paid trip to Beunos Aires for fun!!

Kushal Punjabi who is touted to be the probable winner of the show had a whale of a time, but importantly he was giving his best in the course. Vrajesh Hirjee was trying his best, but could not match the hard physical endurance required for the show. Amit Sareen and host Saumya Tandon were the quietest of the lot. The latter we hear, used the opportunity to do some real sight-seeing..

Our TV actors really know how to party the Latin American way!! However, we wonder how their respective spouses or partners would feel about their escapades.

+ 3
10 years ago loving SRK and his funny coments

this show is much much better than saas bahu drama

i am watching it regularly

10 years ago the contestants are pretty wired in the show...but i like SRK's funny comments...

+ 3
10 years ago Imagine guys, u really know how to make fun of urself, some of ur shows r dead faltu

+ 2
10 years ago This is a copy of the American show" Wipe Out" lol
India copies everything.