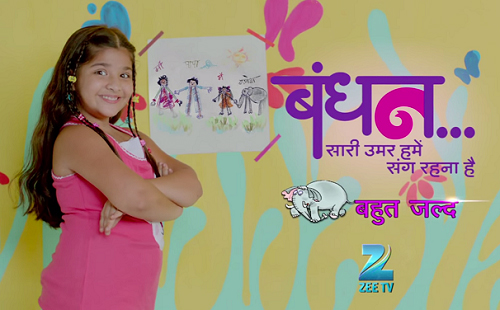 TellyBuzz has kept you updated about the new Zee TV show Bandhan that will soon hit the television screens. We have kept the readers updated with the cast and also that the show will go on air from September 16.

Well, we had reported about the speculation that Qubool Hai might get replaced by this Swastik Production' upcoming venture, but we get to hear from our source that it is DJ's Creative Unit Ek Mutthi Aasman which will bid adieu to its audience.

The show has a star cast of Ananya Agarwal playing Darpan, Aditya Redij as Mahesh and Shweta Munshi as Prabha.

The show Ek Muthi Aasmaan had recently seen a major change where Rachana Parulkar portraying the character of Kalpi was replaced by Asha Negi. The major reason of the show going off air was its low TRPs.

So now, all the Qubool Hai fans can take a breath of relief and Ek Mutthi Aasmaan will have to wait till their favorites come back on screen.

We wish all the luck and good wishes to the entire team of Bandhan.

Gpsshetty 6 years ago RACHANA - you came into our life like an angel will stay till our last. i as being senior citizen never had an addiction to any actors. you r one whom i addicted not only me my hubby too. god bless you my darling angel.

ANewFan 6 years ago Love this news.. No ragna no EMA... Yippiee

-Enigmatic- 6 years ago Love u loads Angel..!! Waiting eagerly for ur's come back..!!

All The Best to Rachana Parulkar !!

jyothi_rao 6 years ago All the best for your future endeavours Asha Negi. Wish for your come back on TV in fresh show.


My Angel Come back Soon... my tv-screen is waiting for u

jyothi_rao 6 years ago Asha Negi you were amazing as Suhana Dewana. Though it was short period, we enjoyed you watching on TV. All the best for your future projects...

...Natasha... 6 years ago Rachana Parulkar rocks
No one can take your place in ema and it's proven :)