Zee TV is proud to present its latest offering 'Agle Janam Mohe Bitiya Hi Kijo', which is the story of seventeen year old Laali's optimism about life and her courage and compassion when it comes to rescuing her family from the throes of hunger and abject poverty. The lead role of the girl who embodies all these virtues and is strong enough to protect her family and loved ones is a relatively fresh face Ratan Rajput. The show produced by Swastik Pictures premieres on 16th March, every Mon-Thurs at 9.30pm only on Zee TV. 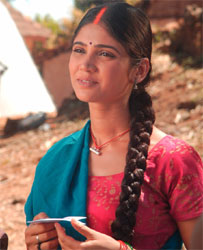 Featured Video
The term poverty is a relative concept. Even after more than 50 years of Independence, India still has the world's largest number of poor people in a single country. In a small town in Bihar is a minority Dalit race called the 'Musahar' who by profession are rat killers and which is their only means of survival. To this race belongs a family of six that forms the subject of this new show.

On one hand where the show talks about poverty, on the other it also highlights the fact that in this male dominated society, a woman has not lost her identity and has the ability to overcome barriers. Our lead protagonist, Laali, sets an example by supporting her father to run the family. The show shatters the age old myth about women being looked down upon in Indian society and at the same time brings to viewers 'another' India where people have to fight hard to house one square meal a day.

In the background of poverty, the extreme sacrifices that Laali makes is a moving story. This seventeen year old girl lives with her parents and her younger siblings in a village called Koyna in Bihar. They come from a low cast background and by profession are rat killers or 'Musahars' who help the Zamindars to protect their land and homes from infestation. The father scrapes together a small income and the girl does odd jobs around the village to support him. And like any other girl of her age, she also dreams of a happy life after her marriage to a man who loves her. So will her dreams ever come true after a life of struggle and disappointments? Will her father be able to fulfill his daughter's desires after he has seen her give up her childhood to help him meet ends?

archana04 13 years ago With the constant downfall in trp of zee show ...... I hope this one brings a sigh of relief for them. Luv Kinshuk and Bidaai

+ 8
13 years ago I watched the video for this show, and it looks awesome.
All the cast of the shows seems really good.
Will be looking forward to this serial, and it sure does look interesting.

+ 3
13 years ago Another story on the subject of the struggle of a girl......how many more are there to come i wonder???

@amitarocks: yes it is replacing KS or rakhi..!!

13 years ago @idiot_1
it was nice sharing my views with you.
Thanks.
And i must say, u r simply amazing.. Never seen someone on IF like u.

13 years ago @idiot_1
why r u saying so..? Even I am not good looking..but these things dont matter.. Mujhe to acting ka ''a'' bhi nahi aataa..
Aur agar main in future koi show banaunga to woh main sirf TRP ke liye nahi banaunga.. I wont mind how many people are watching..
If u had seen jassi on sony, u will realize that looks dont matter.. Even that ugly duckling became a big star..

The show along with many others will depict(& r depicting) a black & poor face of India for a long time as it airs !!!!!!

I will see how many will protest against this show !!!!!!! if not then i will be sure that The Movie was protested coz it was made by a Foreigner !!!!!!!!!