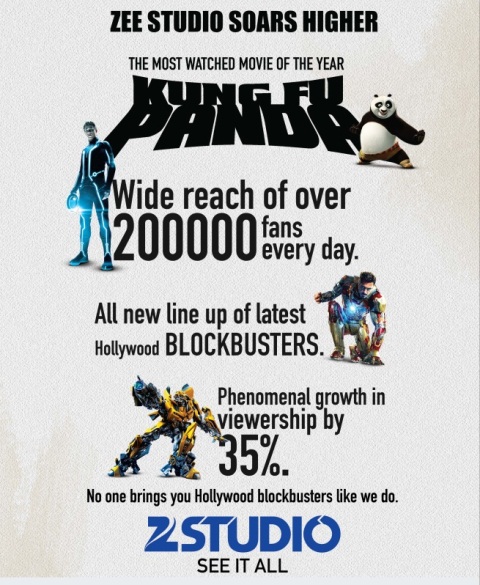 Zee Studio, the ultimate English movie recourse is all set to launch their brand new trade campaign this February to reinstate the channel's longstanding position in the industry.

The channel has witnessed phenomenal growth in viewership by 35% and also in terms of TRP rankings post the recent brand refresh. Robust acquisitions of movie titles along with exclusive properties have helped the brand gain momentum and sustain their spot in the league reaching out to over 2,00,000 fans every day. For the past few weeks, the channel has unswervingly maintained the position at No. 3 and boasts of a market share of 14% for week 05-06' 15 as confirmed by TAM reports.

Zee Studio recently unveiled its brand new ideology See it all'- a new way to engage viewers with its exhaustive library of captivating movie collections that offers a range of genres including Action, Comedy and Animation!  Over the past few months Zee Studio has efficaciously transitioned over to this new identity encompassing a sleek and edgy package, and, is equipped to bring the best of latest Hollywood content to its Indian viewers.

As a part of rebranding Zee Studio spruced up its movie archive with iconic titles like Marvel's The Avengers, Ironman, GI Joe, Brave, Shrek, Kung Fu Panda (most watched movie of the year), Madagascar- Europe's Most Wanted, Rise of the Guardians and The Godfather series is in the pipeline. Premium properties like "Studio Binge", "Super Studio" and "The One" airing blockbuster movies targeting prime time slots were the game changers. Larger than life movies, big stars and famous characters are the most tangible strengths of Hollywood, which were leveraged to endorse the channel's refreshed imagery. Lot of research went into acquiring relevant movies and the programming was well planned.

Speaking about the new trade campaign, Mr. Sharlton Menezes, Head - Content & Marketing, Zee Studio and Zee Caf stated, "The latest campaign reiterates the fact that Zee Studio is a one stop solution for a Hollywood movie fanatic looking for quality content. The campaign aims at reaching out to the right influencers and audiences primarily in key metros being Mumbai, Delhi and Bangalore, to create top of mind brand recall. At the moment, our focus is on maintaining our ranking while the ultimate aim is to be a leader in the industry across India. With this trade campaign, we wish to highlight the stellar performance of Zee Studio in the last 8 weeks. The campaign reminds stakeholders of Zee Studio of its consistent leadership, in the towering skylines of metropolitan India and at the same time, it talks about Zee Studio's loyal and committed viewership thus reflecting the success of the philosophy of See it all'.

Exciting times are promised to the sharp Indian Hollywood movie enthusiast as Zee Studio is soon to come up with more popular blockbusters and premium properties in the year to come.