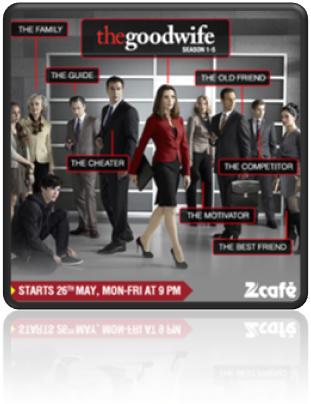 Zee Cafe brings 'The Good Wife' one of the most awarded shows on prime time television to every Indian home! Come 26th May, 2014 and Zee Cafe will telecast the original series from season 1 to 5, weekdays at 9 pm for all its judicious fans.

There is no place you'd rather be than at the edge of your couch anticipating Alicia Florrick's (the protagonist) next move! The scandalous series is critically acclaimed bagging over 30 nominations and prestigious wins that include 4 EMMYs and a Golden Globe.

Zee Cafe is a front runner when it comes to providing the best of International content to the Indian audience and the channel has designed an exhaustive campaign to promote The Good Wife. With billboards placed strategically around key areas in Mumbai, Delhi and Bangalore, Zee Cafe aims to make the run up towards the premiere, a roaring success. Branding at Cafe Coffee Day outlets in Mumbai, Bangalore and Chennai along with extensive promotions across print, radio and social media will ensure optimum recall.