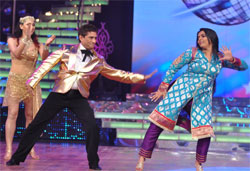 "According to our source, "He was the surprise package of the opening episode, and he danced like there was no tomorrow. His performance impressed all the judges, especially Vaibhavi who was stunned with the composer's energy on enthusiasm".

"Vaibhavi came to the stage, danced with him and appreciated his act a lot. After being showered by all praises, Anand Raj took this as an opportunity to congratulate A.R. Rahman for winning the double whammy at the Oscars", adds our source.

Anand Raj Anand is partnered by Rosita this season..

For now, tune into the inaugural episode of Jhalak Dikhhla Jaa Dancing with the Stars 3 at on Friday February 27 at 9.00 p.m. only on Sony Entertainment Television.

13 years ago Seems like the guy did an excellent job - hats off to him!

However in JDJ, dancing is only half of it... the other half is tellyvoting. He''s succeeded at the dancing, but only God know''s how the tellyvoting will go...

I hope that a talented dancer wins... it would be a shame to see a lousy dancer win!

+ 2
13 years ago OMg ic ant wait anymore for JDJ i just love this show soo much its the best dance show cnat wait for tomorrow and i love vaibhavi and best of luck to all the contestants!

13 years ago I love Vaibhavi as a judge so its nice to see her back.