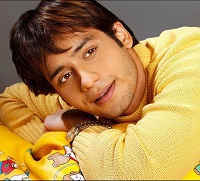 The good looking actor Yuvvraaj Malhotra who is popularly known for playing Karan in Zee TV's popular show Ghar Ki Lakshmi Betiyann, is all set to be seen in one of the episodic of UTV Bindaas' Yeh Hai Aashiqui.

Our source says, "Yuvraaj will be seen playing the character of Kushal and is like a cool dude. He is a self obsessed guy. Yuvraaj has been paired opposite a new comer and currently is shooting for the episodic."

When contacted Yuvvraaj, he confirmed the news saying, "I am feeling good to be a part of the show and it's a very nice character which I am playing in the show. The production team is also very nice to work with and the greatest thing is that this particular episode is being directed by director Ashima who has also directed Yash Raj's movie Mere Dad Ki Maruti. It feels great to work with such a great director and I am enjoying a lot."

Keep it Yuvvraaj and all the best for your show. Till then keep reading this space!

But can we have an article for Yashashri Masurkar? She has shot for an episode of Yeh Hai Aashiqui too! Fans have messaged the IF team, so please can you fulfil this simple request.