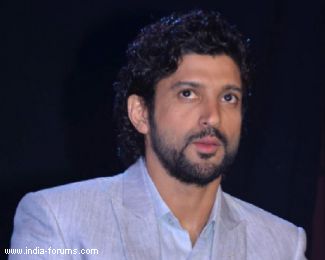 Cricketer Yuvraj Singh, who is recovering after treatment for cancer, has praised Farhan Akhtar's much-talked about look in "Bhaag Milkha Bhaag", based on Olympian sprinter Milkha Singh's life.

The flamboyant sportsperson has recently returned home to the country after being treatment in the US for a rare germ cell cancer.

He is not the only one to have praised Farhan's look in the Rakeysh Omprakash Mehra movie.

Milkha Singh's daughter also showered praises on the actor, and said he looks identical to her father in his younger days.

Rana Daggubati is said to have had a special visitor on the sets of his upcoming film "Department".

According to sources from the set, his "Dum Maaro Dum" co-star Bipasha Basu, with whom he was romantically linked earlier, was the special visitor.

While shooting an intense schedule at the famous Mohammed Ali Road in Mumbai, the cast was asked to be in a zone of extreme seriousness to get the right emotions for their characters.

But all that while, Rana was busy spending time with Bipasha, who broke off with long-time beau John Abraham last year.

While they were shooting a song titled "Chokra" for the film "Ishaqzaade", the temperature in Barabanki in Uttar Pradesh dipped drastically, giving Arjun Kapoor and Gauahar Khan a hard time.

But the actors managed the shoot.

Boney Kapoor's son Arjun, who is making his debut, was to wear a wet vest and Gauahar had to wear a tiny blouse for the song.

While everybody was worried as to whether they would be able to pull off the act, they completed the shoot on time and received a standing ovation from the unit, said a source.

"Ishaqzaade", which also features Parineeti Chopra of "Ladies vs Ricky Bahl" fame, will release May 11.

Jaya Saha to be Arrested by the NCB Soon: Report
25 minutes ago

Shaheer Sheikh opens up on getting offers from Bollywood in ...
48 minutes ago

"This NEWS is FALSE, MALICIOUS & MISCHIEVOUS": Nikhil Slams ...
56 minutes ago