View Profile
After a gap of seven years, India's favourite and most acclaimed director is back! Yes, Yash Chopra has finally declared his next directorial venture but that's not even the best part - he has drafted up the king of romance, Shahrukh Khan along with the nation's most raged about actresses, Katrina Kaif and Anushka Sharma to star in the new venture! 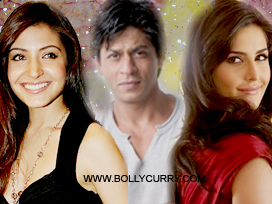 After her infamous birthday scandal three years ago, many wondered if Kat and SRK would ever pair up on-screen. Readers may now put their worries to rest as Yash Chopra has achieved the impossible! The movie also marks Anushka's second film with SRK, who debuted with him under the Yash Raj Banner with the much successful Rab Ne Bana Di Jodi.
The yet untitled romantic saga, which is slated for a Diwali 2012 release, is also said to mark the reunion of the award-winning duo, A.R.Rahman and lyricist, Gulzar.
All those excited, say aye!
Author: Jenifer.
Editor: Gunia.
Graphics: Pooji.
0 Likes

Neha Mehta aka Anjali Wanted To Return To 'Taarak Mehta..' ...
19 minutes ago

Star Plus' Ghum Hai Kisi ke Pyaar Mein To Go To Nashik For ...
24 minutes ago