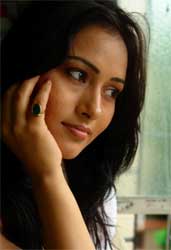 Yamini Thakur who plays the role of Vandana in Zee TV's Pavitra Rishta is back to her show again, and is rejuvenated to kick-start her romantic track with her husband Ajit (Pankaj Vishnu).

We hear that the track of Ajit and Vandu was to start way back, but was postponed due to the ill health of Yamini.

Our source states, "Yamini had been missing from the show for few days. She was not even seen during the important track of Manav (Sushant Singh Rajput) and Archana's (Ankita Lokhande) wedding. She suffered from a bout of malaria and had gotten very weak. She was sent back to her home town Delhi. She is now fine and her track will resume very soon".

We got in touch with Yamini who told us, "Yes it is true that I was in Delhi for about 15 days. I was in a bad condition as I was down with Malaria. I am better now and have resumed shoot".

Talking about her track, the actor said, "My love track with Ajit was to start long back, but due to my sudden unavailability, the production house postponed our track. I am grateful to my team for giving me a break".

We can now look forward to love blossoming between Vandu and Ajit in Pavitra Rishta..

zaara10 9 years ago article has her character name wrong. It's vandita, not vandana. A love track betwn them weirds me out bc of the circumstances under which they married... It doesn't seem right!!

naava 9 years ago oh..that's why Vandita & Ajit disappeared..:).looking forward to the track...all the best Yamini

-monica- 9 years ago me too thought that CVs just forgot Ajit and Vandita.
good to know that she is back.
take care!
all the best!

Spartacus 9 years ago Get well soooooooooon Yamini, and rock the show

Wookie 9 years ago Yipeeeeeeee ATTA is back!!!!!!!!!!! Looking forward to it
Get well soon yamini take care.

mandy0310 9 years ago This is great news, I have been hoping to see more of Vandu and Ajit's track and I am glad it is happening. Also happy to read that Yamini is feeling better, I didn't know she was ill

shanak.hot 9 years ago i also thought they had forgotten about ajit and vandu but she'll be back...
take care

layna 9 years ago i thought CVs had just forgotten about Ajit and VanDITA. good news, but what is this "love" track???

nikitagmc 9 years ago So till now she was not in love with him??? Then why did she hug him??