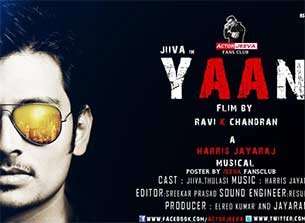 The cast and crew of upcoming Tamil actioner "Yaan" has successfully completed its three week-schedule in Morocco. The film's director Ravi K. Chandran says it was the toughest schedule as there was a lot of snow.

"The team spent three long weeks in Morocco, braving the unprecedented snow storm of this year and successfully completed the shoot on time," read a statement from the production house R.S. Infotainment.

"The film features action sequences that matches to international standards and songs that scanned the visual beauty of Morocco," the statement read further.

The film features Jiiva and Thulasi Nair in the lead roles.

Ravi Chandran took to his Twitter page to share: "Finally, 'Yaan' schedule completed. (It was the) toughest schedule with the truly hardworking Jiiva and Thulasi."

Action scenes in "Yaan" are choreographed by stunt coordinator Mustapha Touki, who has worked on international films such as "Zero Dark Thirty" and "The Bourne Ultimatum".

"Mustapha and his team were all in praise of the director's filmmaking and his acute planning. This reflected the respect of Indian cinema commanded over the overseas technicians. The film is slated to release this summer," read the statement.

Nassar, Thambi Ramaiah, Jayaprakash and Karuna will be seen in important roles in the film.