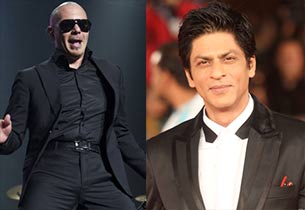 American rapper Armando Christian Prez, popular by his stage name Pitbull, shook a leg with Bollywood superstar Shah Rukh Khan during the opening ceremony of Indian Premier League (IPL) in Kolkata last year. SRK even taught him a few Bollywood moves but the musician wants more than that.

Remembering his performance in India, he said: "I had an amazing time during my IPL visit to India. The kind of love and affection that I received was overwhelming. The people of India are really warm. I really enjoyed performing in front of such a huge and welcoming audience," Pitbull told IANS in an email interaction.

He shared the stage with King Khan and says he would like to team up with him someday.

"I got to learn a few Bollywood footsteps, thanks to Shah Rukh. He is an amazing performer, full of energy. There is nothing as of now, but I would definitely love to work with him in the future," Pitbull said.

If he gets a chance to associate with Shah Rukh, it will be his second collaboration with a Bollywood celebrity after recording "Exotic" with "Barfi!" star Priyanka Chopra in 2013.

He has no project with her as of now, but he didn't stop himself from praising her.

"She has got a wonderful voice and is an extremely talented artist," he said.

The rapper, who has recorded with singers like Jennifer Lopez, Christina Aguilera and Kesha, says he enjoys collaborating with different artists.

"I have always loved working in collaboration with various artists. It gives me a chance to work with all beautiful and talented women," said the "Rain Over Me" hitmaker.

And when asked if he has any Hollywood actress on mind, he said: "I would like to team up with all of them. There are all such gorgeous ladies. It will be a dream coming true!"