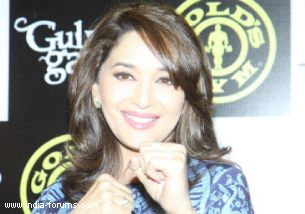 Branding herself a "baby of commercial cinema", actress Madhuri Dixit, who will be seen playing a crusading activist in the forthcoming "Gulaab Gang", Friday said she would "love" to do an out and out comedy film, if the script is to her liking.

"I am a baby of commercial cinema, I did films like 'Raja', which was a mad, funny comedy and I am not averse to that and if I am offered a film like that and if I like the script, then I am open to do that... I would love to do a completely off-the-roof kind of comedy, " she told the media here while promoting "Gulaab Gang".

The actress who has given power-packed performances in films like "Lajja" and "Mrityudand" believes in the feminism that stems from within.

exclusive
Exclusive Jaan Kumar Sanu on keeping up with Bigg Boss 13, looking up ...
40 seconds ago

Subuhii Joshii loses weight all by herself
7 minutes ago

Deepika Padukone Arrives at NCB, to be Questioned over ...
56 minutes ago