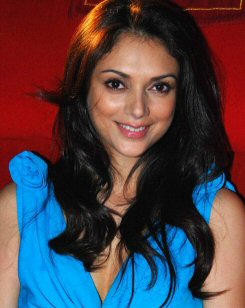 Aditi Rao Hydari, who played an unconventional role in "Yeh Saali Zindagi" and got a bit cozy with Ranbir Kapoor in "Rockstar", feels she will not get typecast.

" 'Yeh Saali Zindagi' and 'Rockstar' are films where I am not playing bold roles. I am not a seductress. I am not seducing a man," she told IANS.

"(In 'Yeh Saali...) I am playing a young girl who is in love with her husband and who is going through trauma because she has a kid and her husband is driving her mad. That's not a bold role. What you do with your partner is not bold. I think audience won't take things that way. So, I don't think I will be typecast," she added.

However, she admits it was a bold step on her part to accept Sudhir Mishra's offer to do "Yeh Saali Zindagi".

"In my personal life, it was a bold step for me to do the role...and I don't regret what I have done. In my mind Sudhir Mishra is someone whom I really respect. So his intention of making a film is honest. You were showing a young couple in love, so they will not play badminton," she said.

Aditi started her career with a small role in "Delhi 6" and after that, is climbing up the success ladder as the length of her roles are getting bigger and better.

Her next is "London, Paris, New York", a romantic comedy and she has teamed up with Pakistani actor Ali Zafqr to play the lead pair. In fact, they they have a kissing scene in the movie.

Directed by Anu Menon and produced by Shrishti Arya and Goldie Behl, the film will release March 2.