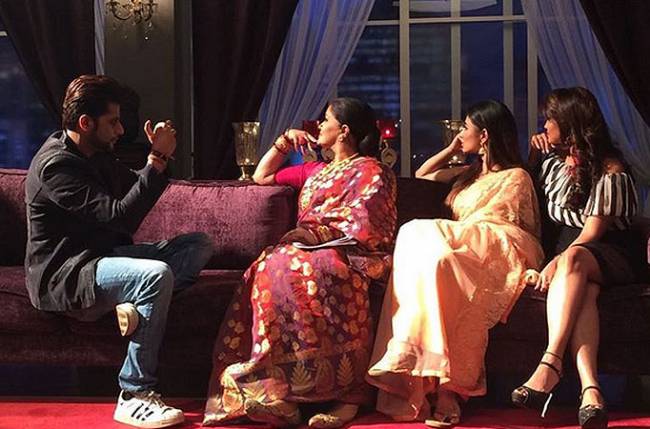 It was just yesterday that Ekta Kapoor's TRP gainer, Naagin 2 wrapped its shoot and the show is all set to bid adieu to the viewers. While the first season saw Shivanya (Mouni Roy) turn into a human form forever and live her life with Ritik, the second season focused on her daughter Shivangi (Mouni Roy) and how she avenged her parents' killers.

But the season had a major shocker with Rocky (Karanvir Bohra), Shivangi's husband turning into a naag and him going on to kill Shivangi with his own hands.

And while the news of Naagin 3 has been out since a long time, Ekta has been dropping cryptic hints about who is she going to cast for the third season.

After a lot of speculations, the lead actress of the series, actress Mouni Roy dropped a major hint at being the female lead of the upcoming Naagin franchise. In fact, not only Mouni but Adaa Khan and Karanvir Bohra too hinted about being a part of the upcoming season.

Mouni also thanked everyone who has been a part of her Naagin journey right from Arjun Bijlani (who kept reappearing in the show) to her current co-stars and even her off-camera team.

The trio also thanked Ekta Kapoor for the show.

We got in touch with Sudha Chandran (who played the antagonist, Yamini) to ask her about her involvement in Naagin 3 to which she said, "I haven't been informed about any such thing yet."

Well, now that we know Mouni is a part of the third season, we can't wait for Ekta to reveal the rest of the cast herself.

Shaina_b 3 years ago How many seasons are we going to have??

gursikh_simran 3 years ago Naagin 1 was the best ...liked the shivanya & Ritik pairing and their chemistry a lot. Season 2 didn't felt like watching .How can they think of a third season.

HereToStay 3 years ago Ok go ahead but just want Adaa khan out of this crap
Sole reason to bear this show was u sesha... Love u Adaa khan want to see u in better shows

Barunsfan123 3 years ago What the.. Can't ekta kapoor come out of Nagin..
Season 1 was really good... I din't watch season 2 but now is it necessary to bring season 3..

Golden.dust 3 years ago Mouni and adaa need to move on! There was no reason for s2 to plug on without AB if Mouni and Adaa were Heart then Arjun was the soul of Naagin, now bringing s3 again with kvb is so cruel on viewers! why what's the need to force roshiv on viewers in s3 too

ajay227 3 years ago After a shitty season2 who is gng to watch Season 3???Adaa Khan pls.move out from this series nd look for other offers...Naagin franchise doesn't deserve u anymore dlng!!!

Mages 3 years ago its obvious that a few N2 cast will be retain...especially KV as the base of S3 is all abt him and arjun...so yes KV might do a small cameo and arjun will be there...EK has destroyed S2 with no story neither for Roshiv nor the show...she has set a base for N3..better work on the storyline and characterisation which is the most important...if this time she never work with the storyline and characterisation...N3 will not work...