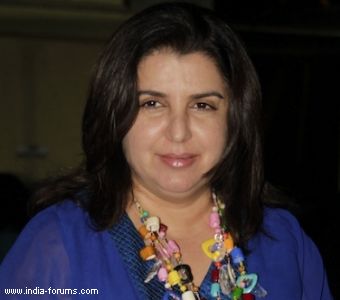 Choreographer-director Farah Khan, who is making her acting debut with "Shirin Farhad Ki Toh Nikal Padi" opposite actor Boman Irani, says she couldn't have done it without her husband Shirish Kunder's support.

"I first asked Shirish whether I should do? Will you be comfortable with it? So, without his support, I don't think I would dare to do something like that," the 47-year-old said here Tuesday when she was asked about her decision to act in films.

"He is the one who supported me. He said, 'If the script is good and if the film is clean, and you will do it, then you will have another feather in your cap. But keep in mind that you do it nicely otherwise people will come and laugh and make fun of you.'," she added while speaking at the felicitation ceremony of producer Ekta Kapoor, by Indian Merchants Chamber (IMC).

Farah clarified that when recently she compared her and Boman's pair with Shah Rukh Khan and Kajol, she was just cracking a joke.

"It was a joke. I just cracked a joke that, yes, after watching Boman and me, you will forget Shah Rukh and Kajol. Please don't take this joke seriously."