View Profile
Ahmed Khan, from dancing to direction to production, has scaled all possible heights successfully in an endeavour to prove his versatility in different creative zones. The multifaceted Ahmed will soon be seen judging a reality show Ek Se Badhkar Ek. Let's see what this ace choreographer has to say about his new role.

Q. How does it feel to be in a show like Ek Se Badhkar Ek?
A. First of all this is the first time that I am judging a show. I have never done it before. So it feels great to be here playing a completely new role as a judge and I am rea 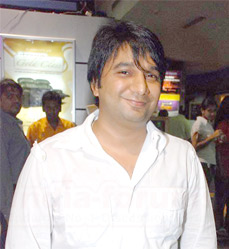 Featured Video
lly excited about it.

Q. What did attract you most to accept the show?
A. I liked the concept very much. Working with bigger stars is something very different and since it is a celebrity based reality show with a difference and an interesting concept in a new prime time, I think people will like it and enjoy every bit of it.

Q. What is the show all about?
A. It's a reality show with singers and dancers competing with each other. There will be groups where one singer and one dancer will be coupled in each group. If the singer does not perform up to the mark, the other partner i.e. the dancer will have to dance well to cover up the deficiency and visa-versa. It depends on who performs first.

Q. Does reality shows have anything real in it?
A. Yes, they do. See, it's a competition and contestants losing or winning in the show and their ways of expressions are not faked. Ours is definitely a real show.

Q. It's been seen that role of the judges are very less in reality shows than the audience polling for contestants. What do you say on that?
A. See, both are important in this show. The judge’s decisions will be the big thing and it will be genuine. It will be more on judges and no one else. I also say that the participants should perform in a very nice way without tying to impress the judge.

Q. You have worked with so many good stars in films and in so many songs. Who do you think is the best dancer till now?
A. All are good but if we talk about the best, I would like to say that I really liked working with Hrithik Roshan and Shahid Kapoor. These two are the best dancers to work with. Because they are good dancers and you definitely need to work even harder with them to bring out the best from them and do something better for them and the song.

Q. In this show, whom would you rate as good dancers?
A. Well, in this show Ek Se Badhkar Ek, I am here only as a judge and not more than that. I am judging the show and not choreographing it. But still if I have to name someone I would say that Abhishek Awasthi and Khushal Punjabi are two good dancers till now in the show, because we have shot only two episodes. They dance very well and pick up things easily.

Q. From choreographing to direction to production, you have been attempting many things. Where are you planning to settle down?
A. By the grace of God, I did not have the opportunity to struggle in this industry. I have just started my journey, so let it be going on and it's too early to think of fixing on some field. I am not that old and have many miles to go. I am only 34 now, so let everything go on as it is.

Q. Which films are you working on?
A. I have just finished Pathshala starring Nana Patekar, Shahid Kapoor and Ayshea Takia in the lead. Then there are films like Ghajini, Kissmat Konnection and Yuvraj which i have recently worked on.

Q. Any interesting incidents you can recall that happened on the sets of these films?
A. There are so many things happening on the sets. But one thing I remember is of the film Ghajini. I had to shoot a song with Aamir Khan and as he put on weight after Taare Zameen Par, I had to postpone the shooting. I asked him to lose weight and within 21 days he lost weight and came in to a better shape. That shows his sincerity to his job. One more thing I would like to say is Aamir has a wonderful body.