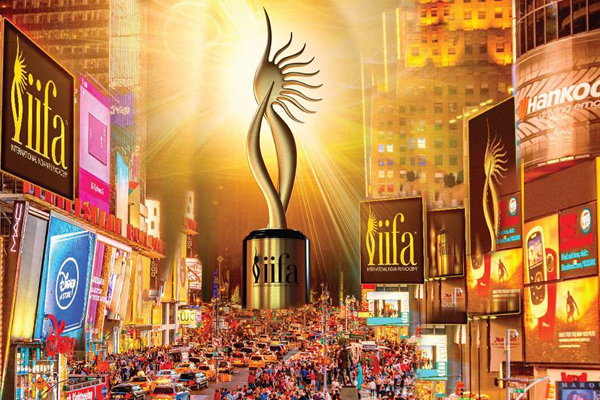 The IIFA Stomp -- a free-for-public Bollywood event here right opposite the iconic red stairs of Times Square -- brought to a halt a number of passersby who were curious to get a taste of Hindi cinema's glitz and glamour.

And it was not just Indians. Foreigners too were happy to stop by and capture the moment, which was a kick-off party for the three-day 18th International Indian Film Academy (IIFA) Weekend and Awards here on Thursday night.

"India... India," cheered Varun, eliciting a roaring response from the audience, which was full of people of different age groups and nationalities, but dominated by the non-resident Indian (NRI) community.

Dia and Taapsee showcased creations from Myntra, while Shilpa, Neha and Disha Patani were showstoppers for designer duo Falguni and Shane Peacock, whose creations have been flaunted by international icons in the past.

A jewellery collection by designer Sonaakshi Raaj was showcased by Huma, and a performance was put up by multi-instrumentalist Karsh Kale.

"Times Square is really where the world meets, and New York is a very multicultural society. Hundreds of languages are spoken here... 36 per cent of New York is immigrants. It's a great opportunity for us to showcase our soft power," Das said.

Besides the IIFA Stomp, the Sheraton hotel at Times Square is buzzing with activity as enthusiastic fans of Bollywood and its gliteratti have parked themselves either outside in the parking bay or at a demarcated space in the lobby -- in the hope of getting photographs of and with the stars.

A hotel official told IANS that the fandom is unprecedented, but for security purposes they are only letting people with either official badges for events in the hotel or those with room keys go beyond a certain point.

In the parking bay, the fans almost seemed to have turned into paparazzi as they were ready to click away with their phone cameras.

The scene outside the elevators which lead to the rooms at the hotel was a window into the love that Bollywood stars reach out for with an event like IIFA, which has traversed through 12 countries over the past several years.

Taapsee Pannu reveals why she supported Neha Dhupia for ‘It’s her ...