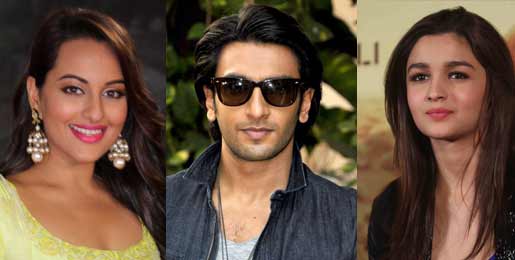 Bollywood's young guns Sonakshi Sinha, Ranveer Singh and Alia Bhatt among other stars are using their acting talent to the T for their own Dubsmash videos -- a lip-syncing application, which seems to be the next big thing after 'selfies'.

Dubsmash is an application that allows users to choose an audio recording of well-known quotes, songs and dialogues from a list, and record a video of themselves. Technically, they act in and dub to a pre-recorded audio.

The actors, like many global fans of the app, after recording their videos, share it on social media with their fans and followers.

The latest celebrity, bitten by the Dubsmash bug was actress Alia Bhatt with her friend Akansha. It has been trending as the "cutest Dubsmash video so far".

Alia has lip-synced the dialogue of a grumpy child, who refuses to listen to his mother, played by Alia's friend, asking her to wear a sweater.

The fun factor of the Dubsmash concept also attracted Sonakshi, who has shared three videos of herself so far. In the first one, she enacts a dialogue from her father Shatrughan Sinha's film "Mere Apne".

In the second one, she mouths a quote from Brad Pitt's 1999 film "Fight Club"; and the third video sees her lip-syncing to a dialogue from cartoon "Johnny Bravo".

The effervescent Ranveer, who is known for his 'bindass' attitude, has shared multiple Dubsmash videos on Instagram.

Ranveer, along with Priyanka Chopra was seen dubbing the lines from their forthcoming film "Dil Dhadakne Do".

In the video, they underwent a role reversal of sorts -- the "Band Baaja Baaraat" actor was seen dubbing for the female part, while the "Mary Kom" star dubbed for the male part.

Actress Jacqueline Fernandez too tried on the trend. She, along with her sisters, dubsmashed the popular song "Boom boom boom" by Dutch pop group Vengaboys.

In his Dubsmash video, actor Ali Fazal, who recently ventured into Hollywood with the film "Furious 7", was seen mouthing the famous dialogue "Teja main hun mark idhar hai (I am Teja, the mark is here)", from the 1994 film "Andaz Apna Apna".

Actress Richa Chadda shared three videos, two of which feature dialogues from her film "Gangs of Wasseypur", and one has her enacting "I like big b*tts", a song by record producer Sir Mix-a-Lot.

Shruti Haasan also grabbed a chance to do a Dubsmash, and she turned Gabbar of 1975 film "Sholay" for her video.