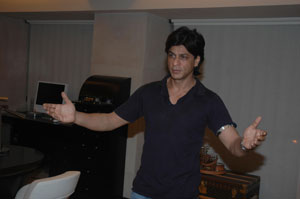 They say the sky is the limit for everything…and Bindass, a UTV venture and India's first local 360-degree entertainment youth brand, brings you a two-hour live and entertaining Airtel Bindass India Concert with Shahrukh Khan and other Bollywood stars. The Airtel Bindass India Concert will take place live on 13 January 2008 at the MMRDA grounds, Mumbai and will be telecast on 26 January 2008 in a truly super Bindass manner only on BINDASS.

Joining the Badshah of Bollywood will be other top artists like Boman Irani, Priyanka Chopra, Dia Mirza, Dino Morea, Rakhi Sawant, Kunal Ganjawala, Ganesh Hegde, Niti Mohan and Mauli Dave. Bindass' very own hilarious Hass Ley India duo Anirudh & Mantra will also be performing at the concert. "All Indian's are huge fans of Shahrukh Khan , so we are delighted to have him and other Bollywood stars performing at the Bindass India Concert", says Sita Laxmi Narayan Swami – Senior VP Marketing, Bindass. 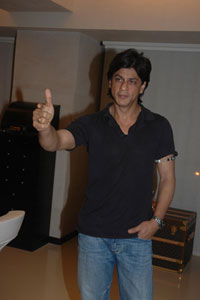 An event by Cineyug, Bindass gives five Indians a fabulous lifetime opportunity to dance with King Khan. So all you SRK fans across the country who ever dreamt of sharing the stage with the Badshah of Bollywood, this is the chance to make your dreams come true.

Mohomed Morani from Cineyug says, "Cineyug is delighted to be working with UTV on the Bindass India Concert which is a complete fun-filled event with lots of masti. I am confident that all the people watching it live and on television will enjoy the concert and have a memorable evening." Bindass brings for its viewers - Dance with SRK contest beginning December 28, 2007 .

For all further information on the SRK contest all you need to do is to keep-watching BINDASS… Even more exciting is the fantastic opportunity to dance live with the superstar. So put on your dancing shoes and get ready….

To know more about the concert, keep watching Bindass.

+ 2
14 years ago sorry fans...but thank god I don't have Airtel...I just hate SRK...hez a family friend of one of my friends...EWW...no offense though

+ 3
14 years ago I want to go to Mumbai nowwwwwwwwww to meet my darling Shahrukh... *blush* aggghhhh!!! Uff, I really hope i'll be able to do this, dunno.. eeps! thanks for the article, uff SRK looks choooo good :$

BTW, what's bindass?? :S we dun get ne channel called bindass ovr here:(:(. does dis mean i am gonna miss this one? NOOOOOOOOOOOOOO!

glittering eyes 14 years ago i am a big srk fan.I think Shahrukh is always close to his fans.It's a nice opportunity for all srk fans.Best of luck King Khan for the new year ahead...