View Profile
Will the music 'Wake you up, SID?!' A chocolate faced hero, a classic beauty clubbed with talent, KJo camp's production- spells like a blockbuster even before its out, eh? Wake Up Sid starring Ranbir Kapoor, Konkana Sen is the next Karan Johan banner up and ready for release this October. From the previews so far, it sounds no exception to the rule. With the anticipation of its release around the corner, here we are in good time to provide a sneak peak of the movie's music reviews... 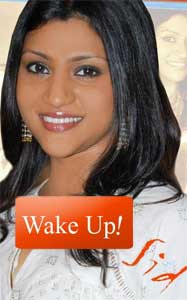 Featured Video
the list of celebrity names mentioned afore felt incomplete, add Shankar-Ehsaan-Loy and Javed Akhtar to the bandwagon and the picture is complete! The latter mentions have given Bollywood reasons to rejoice more often than not with their musical creations. This particular album boasts of five more tracks and a sixth club mix. The title track, which was also the first to be released in theatrical trailers is a bolly-title-classic, typical and expected.


Lyrics to define the movie theme, a pepper salt combination slow and fast tunes alternated and combined, 'wake up Sid' is the definition of those title tracks which become immortal pointers to identifying the movie many years after its actual release.


'Kya karun' is one of the two faster tunes of the album. Although in some sense of lyrics it feels repetitive of the title track in implying the gist of the movie itself, it is without dispute a foot tapping number. A good blend of the more basic instruments - the mouth organ, shaker, keyboard et al- it has the feel of a tune you could wake up wanting to sing, or better still, a tune you could play hitting the right pots and pans in the kitchen while cooking! Clinton Cerejo, the playback, has the vocals of a laid back boy next door, which will capture your attention for how effortlessly it flows into the lyrics as if tailored to fit the song.


The second, 'life is crazy' is lesser of the two in terms of its symphony and lyrics. Worth occasional hearing nonetheless.


'Ik tara' has to be the album's best bet. The in vogue trend of clubbing east and west has done wonders to this particular song. Overlapped guitar strumming, backed up by the drums and the keyboard, Akhtar having rendered his best among all tracks of the movie, and Kavita Seth's unique and less explored melodious notes make the song an triumph! Playing on repeat it can stay so for a long time before wearing off its charm, a symphony that grows on you evoking its essence in your mood.


'Aj kal Zindagi' the last of the five tracks is suited ideally to the road! The tune which intermittently uses soft rock strumming of the guitar, in its rightful claim ought to become a hit with the radio stations. The kind of song you fill routine morning rides to work with, and the exhausted evening drives back. In the real sense a WAKE UP track!


And finally, the one and only club mix, which employs the title track of the movie as its base. In Mahadevan's voice with the persistent clock ticking in addition to the existing tune, in many ways this remix version is capable of gaining favoritism over its original.


In an over all rating, with a couple of impression making songs among the other more regular ones, Wake Up Sid claims a 3/5 for its music.