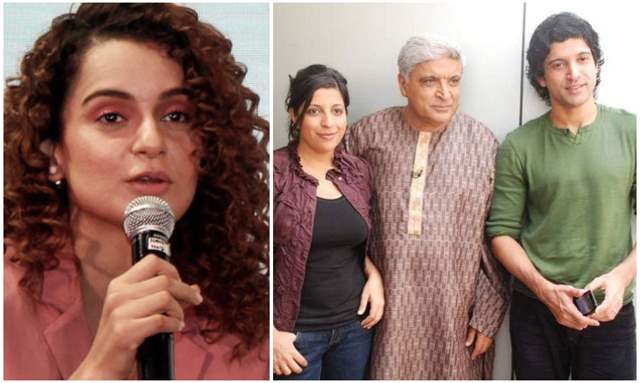 Kangana Ranaut may not be on social media but she is always in the news. Her team on Twitter, with the name ‘Kangana Ranaut Team’ leaves no opportunity to stir up debates and call out the Bollywood biggies on the microblogging site.

Ever since Sushant Singh Rajput’s unfortunate demise, Kangana has been raising her voice and accusing some A-lister names of Bollywood of torturing and neglecting Sushant. She has also accused Karan Johar, Javed Akhtar, Mahesh Bhatt among others of threatening her.

Recently, Javed Akhtar along with kids Zoya Akhtar and Farhan Akhtar were a part of a discussion on the ongoing hot topic, Nepotism in Bollywood. A promo of the interview was released on social media where the veteran lyricist can be heard saying that nepotism exists in every sphere of the world whereas his kids who are also from the industry state that talent is the main factor to recognition.

“If I have money, I am putting money on my son, this is nepotism? Then every industry there is nepotism,” Javed Akhtar said. Farhan added, “If you are very talented, your talent will find a way to the surface. That is bound to happen.” Zoya said, “If I am a barber and I have a barber shop, am I going to leave it to my son or am I going to leave it to the best barber in the city? And that’s the bottom line.”

This clip from the interview that is yet to be released has sparked a sharp response from Kangana Ranaut’s Team. “Dear Akhtars, #KanganaRanaut D/O AmarDeep Ranaut frm Manali evr asked you fr work or favour? Give everything u hv to ur children,hv u heard of live & let live?Why Bully someone’s daughter wen u love your own so much?Why did you call her to ur house& threaten her ? Pls ans this” came a tweet from the Manikarnika actress’ team, that is handled by her sister Rangoli Chandel.

The interview will telecast over the weekend.

However, this is not the first time Kangana has made accusations against Javed Akhtar. In an earlier interview, she had revealed that Javed Akhtar threatened her that if she does not apologise to Rakesh Roshan and Hrithik Roshan.

“Once Javed Akhtar had called me to his house and told me that Rakesh Roshan and his family are very big people. If you don’t apologise to them, you will have nowhere to go. They will put you in jail, and eventually, the only path would be that of destruction…you will commit suicide. These were his words. Why did he think if I don’t apologise to Hrithik Roshan, I would have to commit suicide? He shouted and yelled at me. I was shaking in his house,” Kangana had told Pinkvilla.

phadukaran 1 months ago barber shop analogy is so idiotic, Because barber gives his shop to his son, BARBER Father or Mother doesn't go in town to promote their son, AND if the barber son doesn't do great job, he will have to shut the shop, there is not BHAI or BEHEN who would gang up on other barbers. So keep it to yourself Zoya, you lost the plot.

ishan2003 1 months ago And where is the proof that this has happened...only Kangana's words and she is extremely delusional