View Profile
Well, the things are not always the same as they look like. This is how the B-town trend has been growing since its puberty. Take for example the Bollywood couples who flaunt their giggling happiness in front of the media, quarrel and fight while those clicking flashes get away. I know you must be ready to give example of the recently hot couple Abhi-Ash. Even I would be happiest with their example. But, you see, it’s Bollywood and no one can compare bet 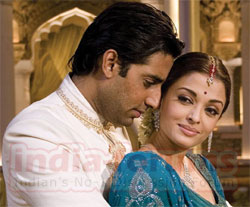 You must be thinking of it as some kind of gag but I am in no mood to do so. Even you will get serious knowing about the matter.

Actually, there’s news that this beautiful couple who had gone to attend IIFA awards function, created a hell lot of a drama in the lobby of a hotel. It’s been heard that Jr. Bachchan wasn’t happy about Ash getting a little loud while they attended the award function and wanted her keep a low profile. But Ash ignored him and continued to be her real self. This gradually got into Abhi’s mind and by the time they reached their hotel the things got out of control and they had an open discussion regarding the problem. Later, it’s said that Abhishek asked his personal security guards to escort Ash to their room.
Hoops! No one should have ever expected things like that from a nice and understanding couple like theirs; especially when Big B always is found escorting and guiding his favourite bahu.

Should we think a little further about the Abhi-Ash future? Will Abhi again shout at Ash? Well, you still look doubtful! But you must understand that Abhi-Ash always look greener on the other side of the camera.