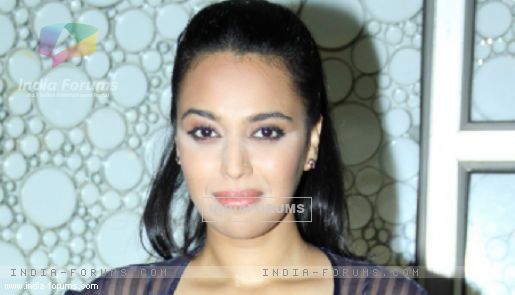 Swara Bhaskar has been seen spewing cuss words on the big screen with ease. But the actress sought training to play a mother in Ashwiny Iyer Tiwari's upcoming directorial "Nil Battey Sannata".

The "Raanjhanaa" actress plays mother to a teenager in the film which promotes education.

"Swara is an amazing actress. She had to put on eight kg for the role. She went to Agra and studied the local culture. She had to take up two months of training. She's not a mother and she plays one in the film," she told IANS.

"She had to calm down. She even went for meditation and yoga," added Ashwiny, who is married to "Bhoothnath Returns" director Nitesh Tiwari.

He helped co-write the film along with Neeraj Singh and Pranjal Chaudhary.

"I got moral support from my husband, but he didn't come on sets while we were filming. In future, I will work independently too. But it's good to have a second point of view from my husband," she said.

With an advertising background, the 36-year-old says despite coming from the "Bollywood circuit", she had to "struggle too".

Her movie was selected for the work-in-progress lab (fiction) at the recently concluded Film Bazaar here that helps many filmmakers connect with producers, distributors and critics from various countries.

She is looking for distributors for the film for which dubbing is to be completed and work on music is to begin too.

The film deals with a social issue.

To a question by IANS about why women filmmakers mostly choose to make films revolving around social issues, she said: "I know that many people assume that only women directors make movies with soft and emotional stories with a social message, but it's not that only women make such stories. For instance, my husband's 'Bhoothnath Returns'. The message of the movie was to go out and vote."

"I wanted to tell a story which is not boring. It is neither 'arty' nor 'sleazy'," she added.

Her next will most likely be a love story.

"I am writing something. It's a love story. I just want to tell a good story and make movies on relationships," she shared.