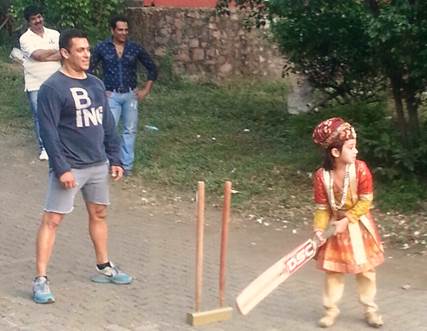 Jodha Akbar's little Salim (played by Ayaan Zubair Rahmani) is clearly on cloud nine. Well, he has every reason to be! After bagging this pivotal role in Zee TV's flagship historical magnum opus, the kid has something else to rejoice about. During one of his breaks at the shoot, Salim was invited to join in for a game of cricket by none other than the bhai' of Bollywood Salman Khan!

While Ayaan was playing with other kids on the sets during their break, he heard some cheers from outside the compound. The inquisitive kids decided to stroll down to find out the reason behind the din and much to their surprise saw the Bollywood superstar enjoying a game of cricket with the crew members. Salman who was shooting for his upcoming film in Karjat next to the sets of Jodha Akbar, was seen in a relaxed mood. Ayaan who is an ardent fan of Salman Khan and also likes playing cricket was completely ecstatic at this unbelievable sight. The Superstar who is known to be a complete sport and always up for masti, on seeing the kids approaching,  immediately offered the bat to Ayaan and asked him to join them for the game.  Delighted by the offer, Ayaan lapped up the opportunity and joined Salman and his troupe.

The kid confidently rubbed shoulders with the actor in the game and was seen hitting a couple of shots. Salman was visibly  impressed by Ayaan's talent and even shared tips with him for hitting sixes.

Talking about his encounter with the superstar, Ayaan said "I still can't believe I met my favourite star and even played cricket with him. He was so nice and even cheered for me whenever I hit a shot. We all had so much fun. I hope he comes here often to play cricket with us".

We hear Ayaan scored quite a few runs in the match with the superstar's  guidance. Little would Ayaan have known that one day this  show would give him an opportunity to not just meet and see the biggest superstar in the country but would also have the chance of spending some quality time playing cricket with him on the sets of the show.

6 years ago I m really fed up on IF.. This article is on Jodha akbar ..but IF didnt tag Rajat tokas n Paridhi sharma n others in this article..feel bad on IF.

6 years ago I m really fed up on IF.. This article is on Jodha akbar ..but IF didnt tag Rajat tokas n Paridhi sharma n others in this article..feel bad on IF ..

9 years ago Oh wow she dating a wrestler? since when??! I am happy for her The girl is so pretty I seen the wrestler he is handsome :D I wonder what dating would be like lol

9 years ago WHO GIVES A DAMN!
#
I.F. Get serious, give us some worth while news instead of these inane and uninteresting news snippets...