View Profile
She was Sujata till Rahman found her golden voice. And today, singer Madhushree, the popular crooner is more than just a name to reckon with in Bollywood. 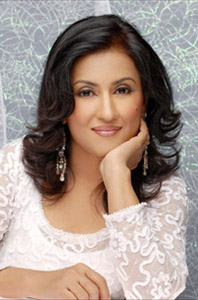 Featured Video
Today, after her album Lagi Lagan is hitting the popularity charts consecutively or the tenth week, Madhushree is not the kind who crests on glory. She is busy singng for A.R. Rahman for his next film.
Says Madhushree, "Though I was a face, there was a time when I thought I should go back to Surniam due to inconsistency of exciting projects. That is when Rahmanji who had christened me Madhushre, offered me 'Naina Milayke' in Saathiya.
"Then came' Kabhi Neem Neem' from Yuva which not just reisntated my position but also helped me bag the  Stardust Award. Rahmanji is my mentor and it is a privilege singing for him always. I treat each time as though it were my first."